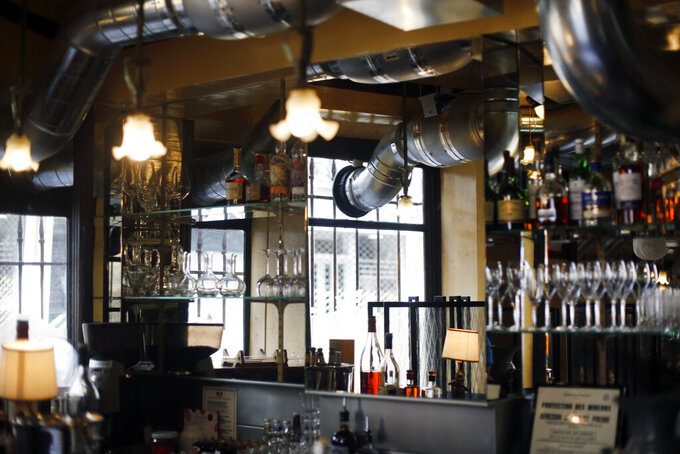 Filtration system is placed to prevent the new coronavirus particles to travel in the air in the Alain Ducasse's restaurant « Allard », in Paris, Thursday, June 11, 2020. French Michelin-starred chef Alain Ducasse unveils virus-protection measures as he prepares to reopen his restaurants, including a new filtration system that works to stop virus particles from the air traveling to neighboring tables. (AP Photo/Thibault Camus) 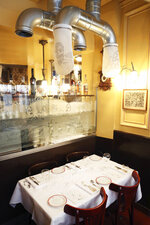 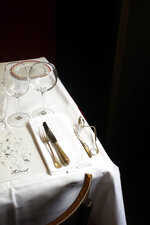 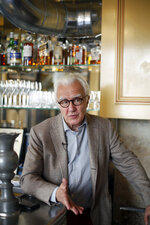 PARIS (AP) — French celebrity chef Alain Ducasse on Thursday unveiled a novel air ventilation system in one of his smallest Parisian restaurants to try to overcome the distancing restrictions related to the coronavirus.

The system, which has cost 50,000 euros to install at the Allard, on Paris' chic left bank, aims to dramatically reduce the risk of airborne virus transmission using technology from hospitals — with a touch of Parisian style.

Ducasse unveiled the system ahead of a French government announcement later this week on the opening of restaurant interiors to diners,

“It’s one of the smallest restaurants in Paris and that’s why we decided to create this system here, as social distancing would make capacity here almost impossible,” Ducasse told The Associated Press.

Using high-tech air filtration devices used in hospitals, a group of inventors conceived of a system of metal pipes, filters and diffusers to slow down the speed of air particles 20 times. That gives time for them to sucked away before they can spread to the next table.

“With this new system, the air in each table is as contained as in an operating theater," Ducasse said.

The system means that the restaurant can keep a capacity of 80%, with the aim of making it economically viable to reopen.

“If you’re a virus carrier, the people just beside you will be safe,” said one of the air filtration designers, Arnaud Delloye.

The system was tested in a 12-hour experiment to show that air molecules did not pass between tables, as particles were slowed down and whisked away by a suction device from “ventilation mouths” above each diner.

Social distancing measures were seen as a death knell for many smaller restaurants over fears that capacity would be reduced by 50 or 60%.

Ducasse’s Allard in the chic Left Bank has been closed since March, and like many eateries in Paris’ narrow cobbled streets there is no outside seating area. Outside areas have been permitted to open since last week in Paris.

The technology is infused with art. Images of air divinities, as well as pigeons and clouds — emblematic of Paris — decorate the filters to prevent a sanitized feel.

France’s state health agency INRS has validated the system, saying it “allows a significant reduction in the risk of virus transmission in a restaurant,” and France’s Ecology Minister Brune Poirson attended the launch.

However, Julian W. Tang, of Leicester University Respiratory Sciences department, expressed some skepticism about such systems, saying they still wouldn't prevent transmission between people sitting at the same table.

“Generally, ceiling height indoor ventilation systems will not really affect the air flows between two people sitting at a table talking,” he said.

Ducasse said he will wait to see the popularity of the system before he applies it to any other of his 40 restaurants worldwide.