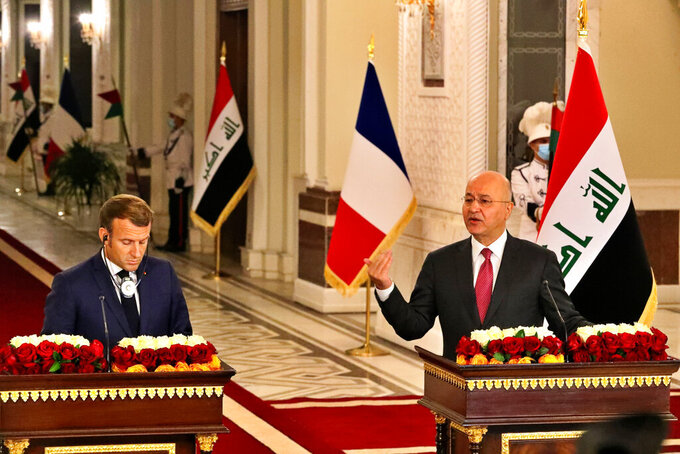 French President Emmanuel Macron, left, and Iraq's President Barham Salihat, right, give a news conference at the presidential palace, in Baghdad, Iraq, Wednesday, Sept. 2, 2020. Macron is the first head of state to visit the Iraqi capital since the country's new prime minister and Iraq’s former intelligence chief formed a government in May. (AP Photo/Khalid Mohammed)

In brief comments after meeting top Iraqi leaders on his first visit to Baghdad, Macron emphasized the need to safeguard the country's sovereignty, and said France will continue to support Iraq.

“Iraq is going through a time of challenges. We will continue to be at Iraq’s sides,” he said.

Macron is the first head of state to visit the Iraqi capital since Prime Minister Mustafa al-Kadhimi, Iraq's former intelligence chief, formed a new government in May. The French leader, who arrived after a two-day visit to Beirut met with him and with Iraqi President Barham Salih. Macron's visit comes amid a severe economic crisis and a pandemic that has put a huge strain on Iraqi politics.

Iraq has also been caught up in tensions between its two allies, the United States and Iran. The country hosts more than 5,000 U.S. troops, and is home to powerful Iranian-backed militias, some of whom want those U.S. forces to leave.

There has also been a spike in attacks by militants from the Islamic State group in recent months, as it takes advantage of a drawdown of U.S. troops and the pandemic.

Macron said the fight against IS is not over, even if there are retreats from some territory.

“The fight against IS, which France is fully invested in as part of international coalition, will continue," he said.

The second challenge is “foreign interference from multiple points, some which has lasted for many years and some that is more recent," Macron said. He added that France fully supports a project to “consolidate the (Iraqi) state” in the economic, military, educational and cultural sectors, describing it as a “project for Iraqi sovereignty.” He did not elaborate.

“I come to Baghdad, which I am happy to visit for the first time, to show our support for Iraq in a time of challenges,” Macron tweeted after arrival. He said there are “numerous challenges to guarantee Iraq’s sovereignty in all dimensions, economic and security-wise, internally and in the region.”

“Our collective security and regional stability depend on this. Our soldiers are fighting side by side to ensure the definitive defeat of the jihadis,” Macron added in his tweet.

Speaking in Lebanon on Tuesday night, Macron said he would discuss in Iraq, among other things, the case of French citizens who fought with the Islamic State group, which was defeated in Iraq in 2017. Nearly a dozen French IS members have been sentenced to death before Iraqi courts.

Al-Kadhimi, who is backed by the United States, assumed office on May 7 when Baghdad’s relations with Washington were precarious. The January killing of Iranian Gen. Qassem Soleimani and a top Iraqi militia leader, Abu Mahdi al-Muhandis, in an American drone strike in Baghdad prompted demands by Shiite lawmakers that U.S. forces leave Iraq.

Al-Kadhimi, as previous Iraqi leaders, has had to walk a tightrope amid the U.S.-Iran rivalry. He visited Washington last month, where he held talks with President Donald Trump. He has said his administration is committed to introducing security sector reforms as rogue militia groups stage near-daily attacks against the seat of his government.

Al-Kadhimi’s administration inherited many crises. State coffers in the crude oil-dependent country were slashed following a severe drop in prices, adding to the woes of an economy already struggling with the global coronavirus pandemic.

Much like Lebanon, which is teetering on the brink of collapse and where Macron spent the day Tuesday urging the political class to reform, Iraq suffers from endemic corruption and financial mismanagement that has squandered the country's vast oil wealth, leaving citizens to struggle with electricity and water shortages and poverty.

Iraqis rose up last October, staging mass demonstrations that called for the downfall of a political establishment that they say doesn't prioritize them. Hundreds were killed and thousands wounded in a fierce security crackdown.