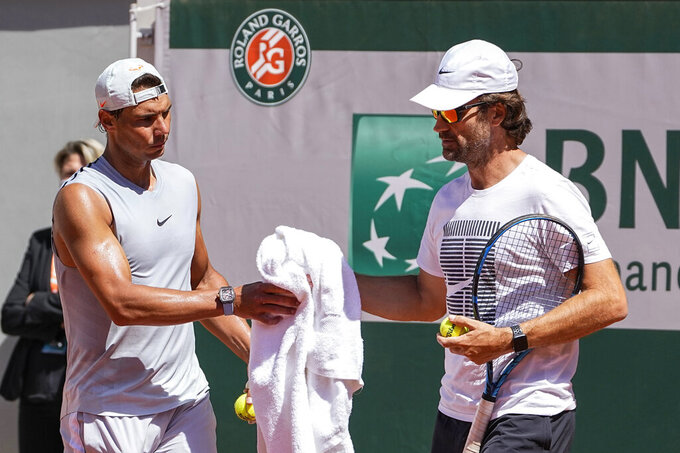 Spain's Rafael Nadal, left, takes his towel from coach Carlos Moya during a training session at Roland Garros stadium ahead of the French Open tennis tournament in Paris, Thursday, May 27, 2021. (AP Photo/Michel Euler)

In an answer brimming with a mix of humility and common sense, Nadal noted that, yes, it did seem he was deemed the favorite for Roland Garros every time he won a match on the surface, but “after two weeks, I don’t know if I (will) play the same like now, no?" and, so, really, the favorite for the French Open should be whoever was playing the best during the French Open itself.

We all know how that turned out back then and, more often than not, ever since.

When his favorite tournament starts Sunday — in May, not September, as it did last year because of the pandemic, and with crowds numbering more than 5,000 on-site daily at the start and 10,000 or more by the end, not merely 1,000, like last year — Nadal will be pursuing a 14th championship in at Roland Garros.

That would break his own record that he keeps breaking and, of even more historic heft, go alongside four triumphs at the U.S. Opens, two at Wimbledon and one at the Australian Open to give the indefatigable lefty from Spain a total of 21 Grand Slam titles in all, which would break the men's mark he shares with Roger Federer.

There are, certainly, other stories to follow over the 15 days of play in Paris.

Federer's return after 15 months away from the Grand Slam stage because of two operations on his right knee. No. 1-ranked Novak Djokovic's attempt to close within one major title of his rivals by getting his 19th, while also bcoming the first man in the professional era to win each Slam tournament twice. Members of the younger set, such as Stefanos Tsitsipas and Alexander Zverev, are still trying to get a first, meanwhile.

Serena Williams, owner of 23 Slam singles trophies, is participating in the last French Open of her 30s. Naomi Osaka, who's won four majors on hard courts, is trying to get past the third round at Roland Garros for the first time — after declaring she won't speak to the media during the tournament. Two women can say they are defending French Open titles: 2020 champion Iga Swiatek, of course, but also 2019 champion Ash Barty, who did not enter the event last year because of the pandemic.

Osaka, who opens the proceedings at Court Philippe Chatrier against Patricia Maria Tig of Romania, is among a half-dozen major champions on the Day One schedule.

Nadal's reign is so remarkable, so unprecedented, a 10-foot statue was unveiled in his honor at the place this week — a rare tribute to an active athlete.

“It's true that I did something very special here in this event,” said Nadal, who turns 35 on Thursday.

“For such a long time, I have been playing well during this part of the season,” Nadal said, by way of explanation. “Probably the clay adapts well to my game, no?”

There are so many measures of the man's mastery, of course, but how about this one: The list of players who can boast of holding a winning record on clay against Nadal consists of Alex Corretja, Olivier Mutis and Andrey Rublev.

“He’s one of the legends,” said Rublev, a 22-year-old from Russia who beat Nadal at Monte Carlo in April.

Over the years, Nadal's infrequent losses on clay have become far more newsworthy than his victories.

What hasn't changed from May 2005 to May 2021: As the French Open gets underway, the man from Mallorca is the man to beat.

“I play with passion, with clear goals and with love for the game, no? So that’s the main issues that I have been working on in my tennis career, no?” Nadal said. “Just keep playing with the right intensity and at the same time have enough passion to go on court every day and try to be better player. That’s the whole thing.”