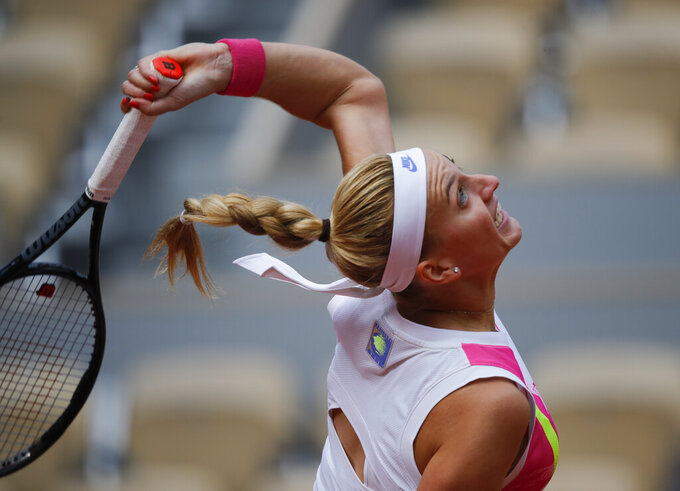 PARIS (AP) — A quick look at the French Open:

Petra Kvitova says it’s a “miracle” that she is playing at all. Sofia Kenin obsesses about winning. Kvitova vs. Kenin in the French Open semifinals Thursday will pit two powerful hitters who are at very different points in their career arcs. They also are the only women who have reached the fourth round or better at all three of the Grand Slam tournaments played in this pandemic-hit year. Kvitova, a two-time Wimbledon champion, was told by doctors she might never be competitive again after she was stabbed by an intruder at her home in the Czech Republic in December 2016. All five fingers on the left hand that she uses to hold her racket were injured and she sustained nerve and tendon damage. Kenin won the Australian Open in February and now is into her first Grand Slam semifinal elsewhere. The 21-year-old American says that performance at Melbourne Park “definitely really gave me a big boost.” The other women’s semifinal involves a pair of unseeded players: 54th-ranked Iga Swiatek of Poland against 131st-ranked Nadia Podoroska of Argentina, the first female qualifier to get to the final four at the French Open.

4 — Number of three-setters won by Sofia Kenin, out of five matches played, en route to the French Open semifinals. Her opponent, Petra Kvitova, hasn’t dropped a set in the tournament.

“First of all, I would like to tell you that I’m not a ‘NextGen player’ anymore. I’m a proper adult.” — 22-year-old Stefanos Tsitsipas, when a reporter referred to the marketing slogan used by the men’s tennis tour to promote younger players.