French Open: Murray vs Wawrinka, Coco vs Konta on Day 1 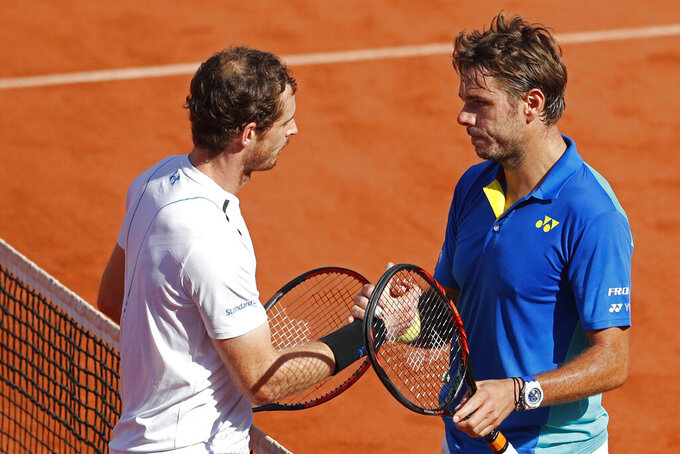 FILE - In this June 9, 2017, file photo, Britain's Andy Murray, left, congratulates Switzerland's Stan Wawrinka with his semifinal win at the French Open tennis tournament at the Roland Garros stadium, in Paris, France. The most-anticipated matchup on Day 1 in the main stadium will be Andy Murray vs. Stan Wawrinka in a contest between two men with three Grand Slam titles apiece. (AP Photo/Petr David Josek, File)

PARIS (AP) — A glance at the French Open, the third and final Grand Slam tennis tournament of 2020:

The French Open starts Sunday with only 1,000 spectators allowed on site, questions about whether France's coronavirus cases will continue to rise and the expected debut — with rain forecast — of the new $55 million retractable roof atop Court Philippe Chatrier. The most-anticipated matchup on Day 1 in the main stadium will be Andy Murray vs. Stan Wawrinka in a contest between two men with three Grand Slam titles apiece. Back in 2017, they squared off in the French Open semifinals — and neither has really been quite the same since, each requiring multiple operations. For Murray, now 33, the trouble spot was his hip; for Wawrinka, 35, his knee. Also on the schedule in Chatrier: No. 1-seeded Simona Halep, the 2018 champion. Over on Court Suzanne Lenglen, 16-year-old American Coco Gauff faces a tough task in her French Open main-draw debut against No. 9 seed Johanna Konta, whose trio of major semifinal appearances include getting that far in Paris last year. “I feel quite comfortable on clay,” Gauff said. “I mean, in my junior career, I had good results on clay.” The 29-year-old Konta on the matchup: “I’m very clear on the fact that I’m going (to be) playing another professional tennis player who is one of the best-ranked in the world. It doesn’t matter if she’s 14 or 40. I think she’s there for a reason.” Also on the Lenglen schedule: U.S. Open runners-up Victoria Azarenka and Alexander Zverev.

Ash Barty of Australia (who is not entered this year)