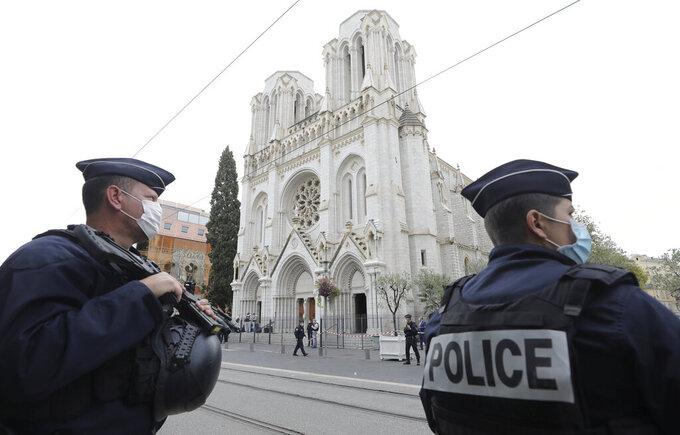 Police officers stand guard near Notre Dame church in Nice, southern France, Thursday, Oct. 29, 2020. An attacker armed with a knife killed at least three people at a church in the Mediterranean city of Nice, prompting the prime minister to announce that France was raising its security alert status to the highest level. It was the third attack in two months in France amid a growing furor in the Muslim world over caricatures of the Prophet Muhammad that were re-published by the satirical newspaper Charlie Hebdo. (Eric Gaillard/Pool via AP)

NICE, France (AP) — France’s anti-terrorism prosecutor says the man who killed three in a Nice church was a Tunisian aged about 20 who entered France from Italy, and was carrying a copy of Islam's holy book, the Quran, on him at the time of the attack.

Jean-Francois Ricard told a press conference late Thursday that the man arrived in Italy by reaching the Mediterranean island of Lampedusa on Sept. 20, and traveled to Paris on Oct. 9.

The travel information came from a document on the man from the Italian Red Cross, Ricard said. The attacker was seriously wounded by police and is being treated in a hospital.

The attack in Mediterranean city of Nice was the third in two months in France that authorities have attributed to Muslim extremists, including the beheading of a teacher.

It comes during a growing furor over caricatures of the Prophet Muhammad that were republished in recent months by the satirical newspaper Charlie Hebdo — renewing vociferous debate in France and the Muslim world over the depictions that Muslims consider offensive but are protected by French free speech laws.

Ricard detailed the gruesome scene encountered inside the Nice basilica where a man and woman were killed by the attacker. The third victim, a 44-year-old woman who managed to flee, died at a nearby restaurant.

A 60-year-old woman whose body was found at the entry of the church, suffered “a very deep throat slitting, like a decapitation,” Ricard said. The 55-year-old man also died after deep cuts to his throat, the prosecutor added.

An investigation was opened for murder and attempted murder in connection with a terrorist enterprise, a common term for such crimes. The prosecutor said the attacker, who was born in 1999, was not the radar of intelligence agencies as a potential threat.

A Muslim holy book and two telephones were among the things found on the attacker. Also found was the knife used to kill him, with a 17-centimeter blade, Ricard said. A bag with his personal affairs also was found containing two unused knives.

Italian media reported Thursday, without naming sources, that the Nice suspect arrived in Lampedusa in September, spent 2 weeks on a quarantine ship in Bari and then received notice of expulsion and slipped away and over the border to France.

NICE, France (AP) — A man armed with a knife attacked people inside a French church and killed three Thursday, prompting the government to raise its security alert status to the maximum level hours before a nationwide coronavirus lockdown.

The attack in Mediterranean city of Nice was the third in two months in France that authorities have attributed to Muslim extremists, including the beheading of a teacher. It comes during a growing furor over caricatures of the Prophet Muhammad that were republished in recent months by the satirical newspaper Charlie Hebdo — renewing vociferous debate in France and the Muslim world over the depictions that Muslims consider offensive but are protected by French free speech laws.

The French consulate in the Saudi city of Jiddah was also targeted Thursday, a man claiming allegiance to an anti-immigrant group was shot and killed by police in the southern French city of Avignon, and scattered confrontations were reported elsewhere, but it is unclear whether they were linked to the attack in Nice.

France’s anti-terrorism prosecutor opened an investigation, and President Emmanuel Macron said he would immediately increase the number of soldiers deployed to protect schools and religious sites from around 3,000 currently to 7,000.

France's national police chief had already ordered increased security at churches and mosques earlier this week, but no police appeared to be guarding the Nice church when it was attacked, and Associated Press reporters saw no visible security forces at multiple prominent religious sites in Paris on Thursday. French churches have been ferociously attacked by extremists in recent years, and Thursday's killings come ahead of the Roman Catholic All Saints' holiday.

The assailant was wounded by police and hospitalized after the killings at the Notre Dame Basilica, a half-mile (less than a kilometer) from the site in 2016 where another attacker plowed a truck into a Bastille Day crowd, killing dozens of people. Thursday's attacker was believed to be acting alone, and police are not searching for other assailants, said two police officials who spoke on condition of anonymity because they were not authorized to be publicly named.

“He cried ‘Allah Akbar!’ over and over, even after he was injured,” said Nice Mayor Christian Estrosi, who confirmed a woman and a man died inside the church, while a second woman fled to a nearby bar but was mortally wounded. “The meaning of his gesture left no doubt.”

Shots punctuated the air and witnesses screamed as police stationed at the grandiose doors to the church appeared to fire at the attacker inside, according to videos obtained by The Associated Press. For a time after the attack, explosions could be heard as sappers detonated suspicious objects.

It was the third attack since Charlie Hebdo republished the caricatures in September as the trial opened for the 2015 attacks at the paper's offices and a kosher supermarket. The gunmen in that attack claimed allegiance to the Islamic State group and al-Qaida, which both recently called anew for strikes against France.

A verdict is planned for Nov. 13, the fifth anniversary of another series of deadly Islamic State attacks in Paris.

The recent attacks come amid renewed outcry over depictions of Islam's most revered prophet — whose birthday was marked in several countries Thursday — and the French government's fierce defense of the right to publish and show them. Muslims have held protests in several countries and called for a boycott of French goods. Dozens of Pakistani students rallied in the capital Thursday to denounce Macron.

“With the attack against Samual Paty, it was freedom of speech that was targeted," Prime Minister Jean Castex told lawmakers Thursday, referring to the teacher who was beheaded after showing his class caricatures of the prophet during a civics lesson. "With this attack in Nice, it is freedom of religion.”

Earlier, the lower house of parliament suspended a debate on France’s new virus restrictions and held a moment of silence for the victims. Castex rushed from the hall to a crisis center overseeing the aftermath of the Nice attack and later returned to announce the alert level increase. Macron left for Nice almost immediately.

“Very clearly, it is France which is under attack,” Macron said as he stood before the church. He added that all of France offered its support to Catholics "so that their religion can be exercised freely in our country. So that every religion can be practiced. ”

In Avignon on Thursday morning, a man with a firearm was shot and killed by police after he refused to drop his weapon and a warning shot failed to stop him, a police official said. And a Saudi state-run news agency said a man stabbed a guard at the French consulate in Jiddah, wounding the guard before he was arrested.

While many groups and nations have been angered or frustrated by France's position on the cartoons, several issued their condolences Thursday, as did France's traditional allies.

The French Council of the Muslim Faith condemned the Nice attack and called on French Muslims to refrain from festivities marking the birth of Muhammad “as a sign of mourning and in solidarity with the families of victims and the Catholics of France.”

Turkey’s Foreign Ministry strongly condemned the attack. "We stand in solidarity with the people of France against terror and violence,” the statement said.

Relations between Turkey and France hit a new low after Turkey’s president accused Macron of Islamophobia over the caricatures and questioned his mental health, prompting Paris to recall its ambassador to Turkey for consultations.

The attack in Nice came less than two weeks after Paty, the teacher, was beheaded. In September, a man who had sought asylum in France attacked bystanders outside Charlie Hebdo's former offices with a butcher knife.

French Jewish and Catholic sites have also frequently been targeted, including the killing of the Rev. Jaqcues Hamel, who had his throat slit while celebrating Mass in his Normandy church by Islamic militants and a plot to bomb Paris’ Notre Dame cathedral. Those attacks were claimed by the Islamic State group, which also is believed to have recruited a man now on trial for an unsuccessful plot to attack a church.

Nice’s 19th-century basilica Notre Dame de l’Assomption is the largest church in the city, but smaller and newer than the cathedral 1 mile (2 kilometers) away. The basilica’s twin neogothic towers are a landmark feature in the heart of the city.

Hinnant reported from Paris. Associated Press writers Angela Charlton and Thomas Adamson in Paris and Zeynep Bilginsoy in Istanbul contributed to this report.