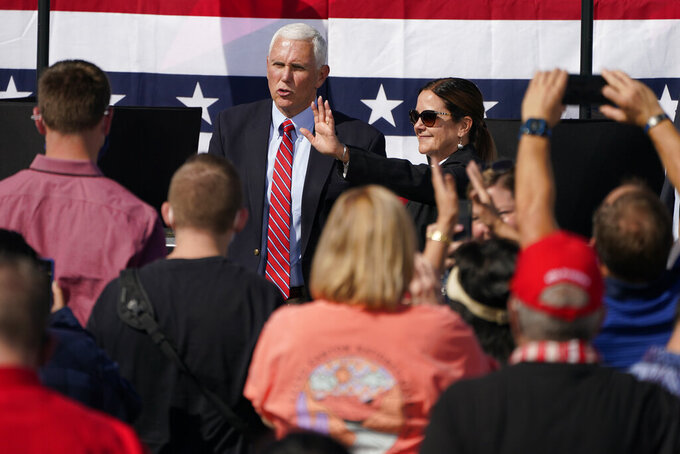 PEORIA, Ariz. (AP) — Vice President Mike Pence applauded President Donald Trump on Thursday for his handling of the coronavirus pandemic, his opposition to abortion and his support for police, during a pair of campaign stops in the Southwest.

Pence even credited the president with winning the debate Wednesday between Pence and Democratic Sen. Kamala Harris.

During his remarks at a rally in Boulder City, Nevada, the vice president cast the debate staged in Utah as detailing two distinct visions for the nation.

At a second stop in the Phoenix suburb of Peoria, he repeated many of the points he made during the debate, casting former Vice President Joe Biden as ineffective in his years in U.S. government and pushing back against the notion that there is systemic racism in police departments.

The Arizona swing came as Biden made his first campaign visit to the state, joining Harris for several stops in metro Phoenix. Biden has for months singled out Arizona as the first example on an expanded battleground map, citing demographic changes, new residents and realignment away from Republicans among key suburban voters.

Biden hammered Trump for his handling of the coronavirus pandemic and a failure to address the needs of working Americans.

“You’re facing real challenges right now, and the last thing you need is a president who exacerbates them, who ignores you,” Biden told a union crowd in Phoenix, adding that Trump “looks down on you.”

Pence, meanwhile, worked to hold onto Arizona and recapture Nevada, which Trump lost by a slim margin in 2016.

“President Trump and I know, we don't have to choose between supporting law enforcement and supporting our African American neighbors,” he said in Nevada. “Under this president, we're going to have law and order in every city in every state for every American of every race and creed and color, so help us God."

Pence's praise for the president and pitch for another four years in the White House came 26 days before the election as Nevada and Arizona voters began receiving ballots in the mail.

While Trump has been sidelined with the coronavirus in Washington, Pence said the president would be “back on the campaign trail before you know it.”

In Nevada, Pence spoke to about 250 people, less than half of whom were wearing masks as they sat outside at the Boulder City airport. Attendees were sitting in folding chairs that were spaced out but closer than the 6 feet (2 meters) recommended by health experts to reduce the risk of spreading coronavirus.

Pence was introduced by his wife, Karen Pence. Former Nevada Attorney General Adam Laxalt and Republican congressional candidate Dan Rodimer, a former professional wrestler, also spoke at the event. Karen Pence also introduced her husband in Arizona and they were the only ones to speak.

In Peoria, he spoke in the parking lot of a company that manufactures protective gear for police and military use. About 300 people endured 100-degree temperatures made more grueling by the asphalt and lack of shade as they waited for Pence to speak.

A few were treated for heat symptons in a tent while the rest waited in closely set chairs, many without masks.

Pence urged them to get out and tell their friends and neighbors to vote for Trump.