Friendship between Ireland, tribes lives on in lacrosse 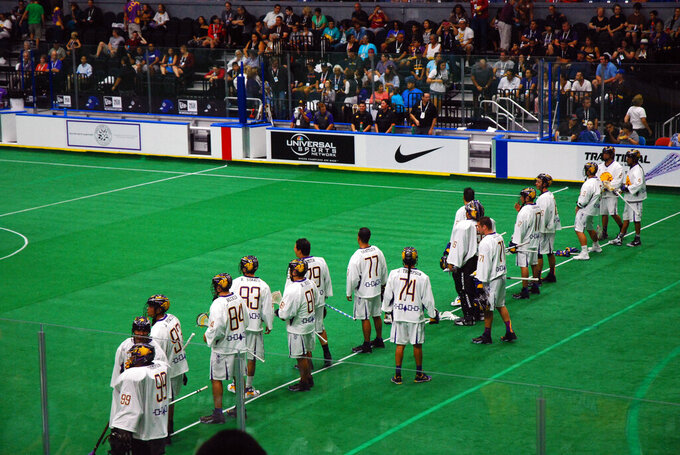 This Sept. 18, 2015 photo shows the Iroquois Nationals lacrosse team line up prior to competing in the 2015 World Indoor Lacrosse Championships on the Onondaga Nation just south of Syracuse, New York. The Ireland Lacrosse team recently bowed out of the sport's top international tournament to open up a spot for the Iroquois Nationals. It's the latest in a series of gestures between the country and U.S. tribes that date back to 1847, when Choctaw leaders gave $170 to the Irish as their country battled a potato famine that resulted in the death of tens of thousands. Historians estimate today's value of the amount at roughly $5,000. (Jourdan Bennett-Begaye/Indian Country Today via AP)

More than 170 years ago, a U.S. tribe did Ireland a solid. The European country has not forgotten it.

The Ireland Lacrosse team recently bowed out of the sport’s top international tournament to open up a spot for the Iroquois Nationals.

It’s the latest in a series of gestures between the country and U.S. tribes that date back to 1847, when Choctaw leaders gave $170 to the Irish as their country battled a potato famine that resulted in the death of tens of thousands. Historians estimate today’s value of the amount at roughly $5,000.

The donation came only years after the Choctaw were reestablishing themselves in what is now known as Oklahoma. The Choctaw people and other southeastern tribal nations were ousted from traditional homelands by the U.S. government and forced to walk west in the removal known as the Trail of Tears.

The gift has inspired at least three visits between leaders of Choctaw and Ireland. A feather-like sculpture called “Kindred Spirits,” built in County Cork, Ireland, and dedicated in 2017, pays homage to the Choctaw.

In May, hundreds of Irish donated to a fundraising campaign to help Navajo and Hopi families with supplies during the COVID-19 pandemic. The GoFundMe drive has grown to nearly $5.9 million since March 15.

In a statement published by the New York Times, Choctaw Nation of Oklahoma Chief Gary Batton said his nation was gratified to learn of the gesture to the Navajo and Hopi people.

“We have become kindred spirits with the Irish in the years since the Irish potato famine,” he said. “We hope the Irish, Navajo and Hopi peoples develop lasting friendships, as we have.”

The Choctaw and Irish relationship also sparked a poetry collaboration between author LeAnne Howe, Choctaw, and Irish poet Doireann Ní Ghríofa, along with the Choctaw-Ireland Scholarship Programme, a scholarship for Choctaw students to attend the University of College Cork in Ireland.

Ireland’s most recent gesture to benefit the Iroquois Nationals, or Haudenosaunee Nation — a confederacy of six First Nations: Mohawk, Oneida, Onondaga, Cayuga, Seneca and Tuscarora — opened a window for the Nationals, creators of lacrosse, to participate in the 2022 World Games in Birmingham, Alabama. Their program is based in Lafayette, New York.

Ireland was one of eight men’s teams invited to compete.

The Nationals were left out because organizers didn’t recognize them as representing a sovereign nation. But officials changed the requirements following pressure from lacrosse programs and other organizations, heat on social media and an online petition that garnered more than 50,000 signatures.

The Nationals accepted an invitation to compete in the World Games.

“We’ll see you all in Birmingham,” the team tweeted. “Let’s do this.”

“We have arrived at an outcome that will create a true showcase for lacrosse at The World Games 2022 in Birmingham,” World Lacrosse President Sue Redfern said. “This was achieved by our organizations coming together, listening carefully and working constructively to reach a shared goal.”

World Lacrosse Chief Executive Officer Jim Scherr thanked the World Games association and organizing committee, along with Ireland Lacrosse and the Iroquois Nationals, “for their partnership and support in working toward an outcome about which we can all be pleased.”

Ireland Lacrosse CEO Michael Kennedy previously told Lax Sports Network that since his team was the last to qualify based on 2019 rankings, he knew World Lacrosse would reach out.

“I said, ’Look guys, I’m going to make this very easy. We want the Iroquois to take up the position which is rightfully theirs,” Kennedy said.

Iroquois Lacrosse said Ireland Lacrosse went “above and beyond.”

“We are storytellers, but today, we are without words as we contemplate the generosity of spirit shown by Ireland Lacrosse,” the team said in a statement. “All we can say is: You are in our hearts. You are part of the spirit of lacrosse. We will never forget that. Nyawenha, Go raibh maith agat. Thank you.”

“By not taking part, Ireland Lacrosse have won something worth more than any medal — the friendship and respect of their Iroquois peers.”