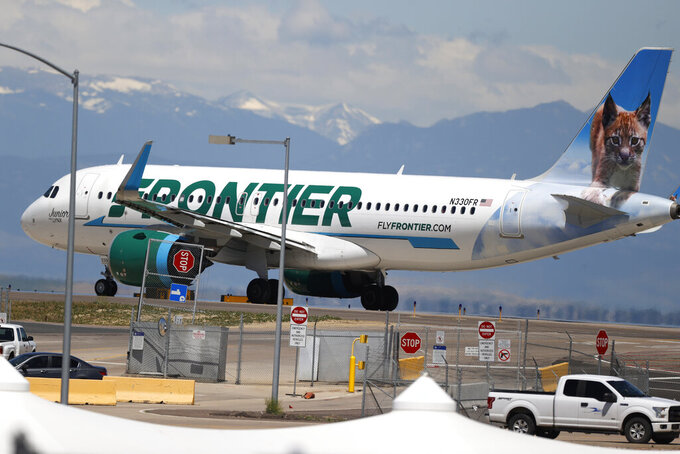 FILE - In this June 10, 2020 file photo, a Frontier Airlines jet heads down a runway for take off from Denver International Airport as travelers deal with the effects of the new coronavirus in Denver. Frontier Airlines says its hopes to gross about $630 million by selling some of its stock to the public. The discount airline said in a regulatory filing Tuesday, March 23, 2021, that it expects to sell 30 million shares at between $19 and $21 per share. (AP Photo/David Zalubowski, File)

DENVER (AP) — Frontier Airlines said Tuesday it expects to raise about $630 million from an initial public offering of a small portion of its stock, a deal that it hopes will value the budget airline at about $4.5 billion.

Frontier's parent company and its current owners hope to sell 30 million shares at between $19 and $21 per share.

Frontier Group Holdings said in the filing that it is well-positioned to recover from the pandemic because of its focus on domestic leisure travel, which is expected to rebound more quickly than business or international flying.

After the IPO, the company will have 215 million shares and trade under the ticker symbol “ULCC,” an industry acronym for ultra low-cost carrier. Frontier turned into a discount carrier after it was purchased by private equity firm Indigo Partners in 2013.

Frontier plans to follow in the path of another leisure airline, Minneapolis-based Sun Country Airlines, which went public this month and has a market value of about $1.9 billion.

Like other airlines, Frontier took a financial beating last year as the pandemic devastated air travel. The Denver-based carrier's revenue fell by half, to $1.25 billion, and it lost $225 million after earning $251 million in 2019.

Frontier has about 100 Airbus jets and has ordered 156 more for delivery by the end of 2028. It focuses on leisure destinations, with key operations in Denver, Orlando and Las Vegas.