Fury-Wilder III by end of the year, promoter says 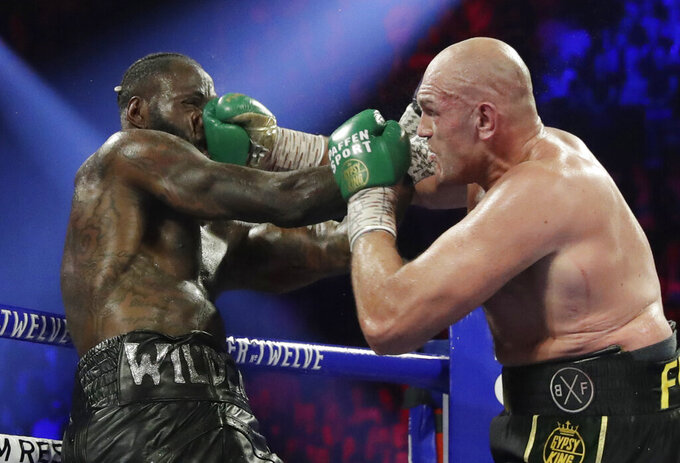 FILE - In this Feb. 22, 2020, file photo, Tyson Fury, of England, lands a right to Deontay Wilder, left, during a WBC heavyweight championship boxing match in Las Vegas. Boxing promoter Bob Arum says he plans to stage a card of five fights on June 9 at the MGM Grand. It's the first of a series of fights over the next two months at the Las Vegas hotel. A second fight card will be held two nights later. ESPN will televise both cards to kick off twice weekly shows at the hotel in June and July. The fights are pending approval of the Nevada Athletic Commission. (AP Photo/Isaac Brekken, File)

The U.S. promoter of Tyson Fury is hoping to stage a third heavyweight fight between the British boxer and Deontay Wilder by the end of the year, potentially in the Chinese enclave of Macau.

Bob Arum told The Associated Press that Fury “owes” Wilder a third fight after claiming the WBC belt off the American with a seventh-round stoppage in February. Only then would Fury turn his attention to an all-British fight with Anthony Joshua, the WBA, IBF and WBO titleholder, in early 2021.

“We hope to do that fight in November or December,” Arum, the CEO of Top Rank, said of Fury-Wilder III.

“Whether it’s for a full audience or a limited audience in the United States or put it on in Macau, which may be open for full arenas as early as November... you know, we’re exploring all our options.”

“Next year there’ll be this huge fight with Fury and Joshua, that’s the way the cards turn,” Arum said. “And I agree it will be a massive, massive fight wherever it takes place; U.S., U.K. or someplace elsewhere.”

Fury has said he has been approached to take on Mike Tyson after the 53-year-old former undisputed world champion posted workout clips on social media last month, proclaiming “I’m back.”

But Arum thinks they should only ever meet in a “joke” fight for charity.

“If it’s anywhere near serious, I’m not going to be a participant in something that could be really deadly,” he told the AP. “Mike Tyson was a great fighter, he’s in his 50s now. (He) doesn’t go and fight really seriously a guy who is at the top of his game in his 30s.

“That’s not right and nobody should encourage it. If it’s a joke, they go and spar around, who cares? And particularly for charity, that’s great.”

Fury-Wilder II was the last fight Arum promoted before the enforced shutdown of sport because of the coronavirus pandemic.

Arum will use the same venue, the MGM Grand Hotel in Las Vegas, to launch live boxing’s comeback in the United States on Tuesday.

A six-fight card, headlined by WBO featherweight world champion Shakur Stevenson, will kick off a series of twice-weekly events in a hotel ballroom across June and July which will all be staged without fans and media, with the fight announcers based remotely.

In the arena, the fight judges will be pushed back from their usual ringside position and adjudicate from a distance of eight feet.

All boxers will have been tested for COVID-19 on arrival and then have their movement limited to a bubble of block-booked floors of the hotel and a separate room where they will train and eat. A dedicated lift will transport fighters between the two areas.

They will then be tested again for the coronavirus after Monday’s weigh-in.

“It is more than ethical," Arum said of bringing boxing back during a pandemic. "It is something that is a contribution because people are battling this coronavirus, but they still have to lead their lives.

“They still are entitled to enjoyment. Nothing gives people enjoyment like live sports, whether it’s boxing or football or something like that.”