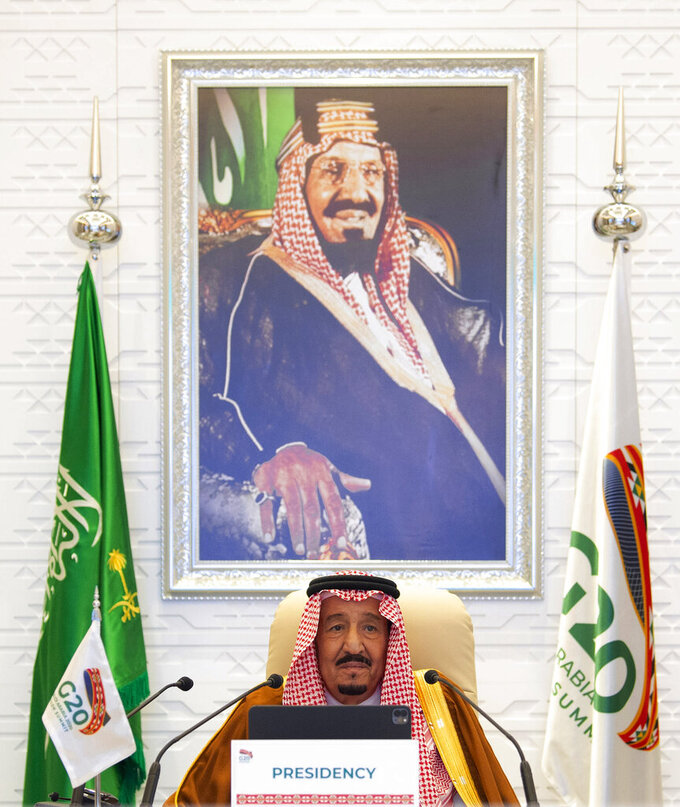 DUBAI, United Arab Emirates (AP) — The Group of 20 summit opened on Saturday with appeals by the world's most powerful leaders to collectively chart a way forward as the coronavirus pandemic overshadows this year's gathering, transforming it from in-person meetings to a virtual gathering of speeches and declarations.

The pandemic, which has claimed more than 1.37 million lives worldwide, has offered the G-20 an opportunity to prove how such bodies can facilitate international cooperation in crises — but has also underscored their shortcomings.

“We have a duty to rise to the challenge together during this summit and give a strong message of hope and reassurance,” Saudi Arabia’s King Salman said in the summit’s opening remarks.

While G-20 countries have contributed billions of dollars toward developing a vaccine for the virus, they have also mostly focused on securing their own vaccine supplies. Countries such as Britain, the U.S., France and Germany — all G-20 member states — have directly negotiated deals with pharmaceutical companies to receive billions of doses, meaning that the vast majority of the world’s vaccine supply next year is already reserved.

U.S. President Donald Trump highlighted what the U.S. has done to response to the coronavirus and rebuild the economy and work on vaccines, which are expected to become available soon, according to White House press secretary Kayleigh McEnany. Trump, however, appeared not to have acknowledged that Joe Biden won this month's presidential election.

“It’s been a great honor to work with you and I look forward to working with you again for a long time,” Trump said, according to audio obtained by The Guardian. The South China Morning Post reported similar comments.

A day before the summit, U.N. Secretary-General Antonio Guterres said that while $10 billion has been invested in efforts to develop vaccines, diagnostics and therapeutics, another $28 billion is needed for mass manufacturing, procurement and delivery of new COVID-19 vaccines around the world.

Guterres called on more G-20 nations to join COVAX, an international initiative to distribute COVID-19 vaccines to countries worldwide. The United States has declined to join under Trump.

The pandemic has had a far-reaching economic impact on developing countries and pushed millions into extreme poverty. It has also plagued the world's wealthiest nations, with nine G-20 countries ranking highest globally for the most cases of COVID-19 recorded. The United States tops the list, followed by India, Brazil, France, Russia, Spain, the U.K., Argentina and Italy, according to a count kept by Johns Hopkins University.

Three G-20 leaders participating in the summit have been infected by the coronavirus this year: British Prime Minister Boris Johnson, Brazilian President Jair Bolsonaro and Trump.

The virus shows no signs of abating as major cities in the U.S. and Europe bring back lockdowns and curfews. The World Health Organization says more cases of COVID-19 have been reported in the past four weeks than in the first six months of the pandemic.

The International Labor Organization says an equivalent of 225 million full-time jobs were lost in G-20 countries alone in the third quarter of 2020. G-20 member-countries represent around 85% of the world’s economic output and three-quarters of international trade.

In a sign of the times, the traditional “family photo” of leaders in the summit was digitally designed and superimposed on a historical site just outside the Saudi capital, Riyadh, which would have hosted the gathering. The kingdom has presided over the G-20 this year.

As part of the summit, seven leaders released video messages on “Pandemic Preparedness and Response”. France's President Emmanuel Macron warned of the challenges in obtaining “universal access to health technologies against COVID-19”. German Chancellor Angela Merkel called for strengthening the World Health Organization and stressed the pandemic can only be overcome if an affordable vaccine is available to all nations.

In a video statement released ahead of the summit, Johnson appealed to global leaders to harness the resources of the world’s wealthiest nations to end the COVID-19 pandemic and tackle climate change.

“Our fates are in each other’s hands,” said Johnson, who plans to attend two virtual events at the summit while self-isolating at home in London after coming into contact with someone who tested positive for COVID-19.

Bolsonaro, who spent months downplaying the severity of the virus while deaths mounted rapidly inside Brazil, emphasized in a video message that world leaders “should take care of people’s health and of the economy at the same time."

President Trump also participated in the closed-door virtual sessions that are taking place Saturday and Sunday. It does not appear that any leaders dropped out of the summit, despite calls by rights groups, lawmakers and EU parliamentarians for leaders to boycott the gathering to protest Saudi Arabia’s human rights record and war in Yemen.

G-20 heads of state last gathered virtually for an emergency meeting in March as the coronavirus was fast-spreading around the world. At the time, they vowed “to do whatever it takes to overcome the pandemic.”

G-20 nations have since agreed to suspend debt payments for the world's poorest countries until mid-2021 to allow those nations to focus their spending on health care and stimulus programs. The U.N. secretary general, however, has called on the G-20 to extend debt repayments through the end of 2021 and expand the scope to middle-income countries in need.

“I am confident that the Riyadh summit will deliver significant and decisive results and will lead to adopting economic and social policies that will restore hope and reassurance to the people of the world, ” King Salman said.

Associated Press writers Danica Kirka in London, Tia Goldenberg in Jerusalem and Deb Riechmann in Washington contributed to this report.