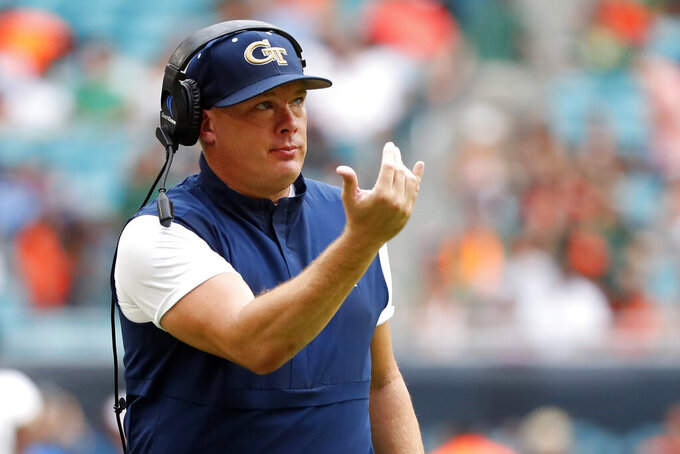 FILE - In this Oct. 19, 2019, file photo, Georgia Tech head coach Geoff Collins gestures during the first half of an NCAA college football game against Miami in Miami Gardens, Fla. With doubts still hanging over the season because of the coronavirus pandemic, Georgia Tech begins practice for Year 2 under coach Geoff Collins. (AP Photo/Wilfredo Lee, File)

ATLANTA (AP) — For Georgia Tech, this most unusual of seasons — assuming there is a season — began with two-a-day practices.

No, it wasn't two practices in one day for the entire team.

Coach Geoff Collins split his players into two groups and put each of them through a morning practice Wednesday, all in hopes of making things a bit safer amid the coronavirus pandemic.

“This is not business as usual,” Collins said, meeting remotely with reporters shortly after the second workout ended.

He pointed to a number of steps the program is taking during preseason practice, from circles painted on the sideline to promote social distancing to an electronic whistle he is using to make sure he is heard while wearing a mask.

“I never knew that that existed until a week ago, but blowing a whistle with one of these things on,” he said, holding up his mask, “is not very successful.”

The double practice sessions are perhaps the most notable change from the normal routine.

Getting a jump ahead of the sizzling Atlanta heat, Collins and his staff worked for nearly two hours with the first group beginning at 7:30 a.m., took a brief break to clear the field, then brought on the next group at 9:30 a.m.

The veterans are mainly working in one group, while the younger players and freshmen are assigned to the other. Each has its own locker room, yet another step to lessen the risk of contracting the highly contagious virus.

“We want to minimize the number of people standing around,” Collins said. “It's basically two-a-days for the coaches and staff.”

Making things even more unusual — the Yellow Jackets don't even know who they're playing in their first game. They were supposed to host powerhouse Clemson in a prime-time game at Bobby Dodd Stadium on Sept. 3, but the Atlantic Coast Conference has pushed back the openers by a week or more and gone to a revised schedule in which all but one game will be within the conference.

Georgia Tech will still host the Tigers at some point, but the ACC has yet to release dates for the new schedule. The Yellow Jackets also are working to line up a nonconference opponent because the annual season-ending game against rival Georgia was canceled when the Southeastern Conference decided on a 10-game, league-only schedule in 2020.

That news was a bitter blow for Georgia Tech and other teams in the ACC, which has specifically pushed for the one nonconference game as a means of protecting in-state rivalries. Other casualties of the SEC plan were Florida-Florida State, Kentucky-Louisville and South Carolina-Clemson.

This will be the first time since 1924 that Georgia Tech won't face the Bulldogs.

“I hate that my seniors, who have laid the foundation for our program and all the success we're going to have, are not going to get to play a rival that is 72 miles outside of Atlanta,” Collins said. “But I'm confident that if we continue to go about our business, when we do play them in the future, the team (the Bulldogs) see won't be the team they saw back in November.”

Georgia Tech closed out its first season under Collins with a 52-7 loss to the Bulldogs — its worst defeat in a series that began in 1893.

The Yellow Jackets finished 3-9, a not-so-unexpected outcome given the massive rebuilding job that Collins faced after taking over for longtime coach Paul Johnson and switching from the run-oriented triple option to a more conventional offense.

Collins is counting on significant improvement in his second season.

If there's a season.

As Collins talked with reporters from inside the practice facility, he apologized for an annoying noise that made it a bit hard to hear his gravely voice.

“They're disinfecting all the equipment right now,” he explained. “Which is a good thing.”