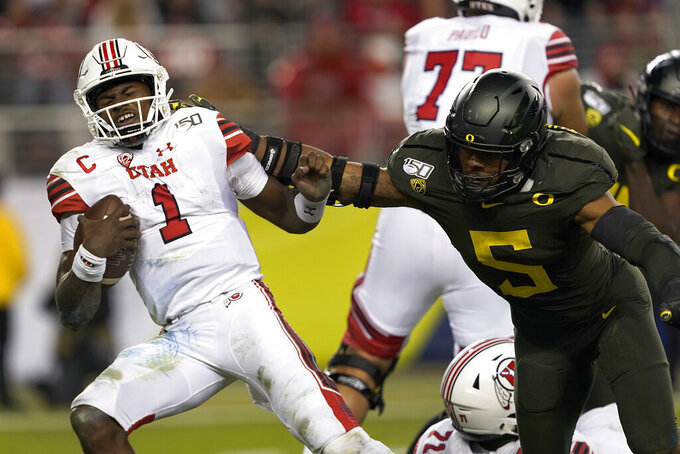 The Pac-12 could be playing football and basketball sooner than expected after the conference announced Thursday that each of the 12 schools will soon have the capacity to perform daily, rapid COVID-19 tests on athletes.

He said the ability to test athletes every day and receive results in 15 minutes could lead to the Pac-12 getting back in the game before the Jan. 1 date set by the conference's university presidents when they postponed the fall sports season on Aug. 11.

“This is a very important and significant step, but there are other considerations that will go into our return-to-play plans,” Scott said.

The Pac-12's six schools in California and Oregon are still restricted from holding full practices because of state mandates to mitigate the spread of the coronavirus. However, the professional football teams in California have been given permission to proceed with normal preparations for a season that starts Sept. 13.

“Even if we were ready to start tomorrow we couldn’t,” Scott said. "There’s more to be done for sure in terms of working with health officials.”

The Pac-12 said tests and Quidel's Sofia 2 testing machines are expected to be delivered to the conference's schools by late September. The machines can perform what is known as a point-of-care antigen test.

Doug Bryant, president and CEO of Quidel Corporation, said the company has agreements with several schools that are already using its rapid tests. He declined to say which schools, and added the partnership with the Pac-12 is different from its other deals because the company will be providing the conference with the capacity for daily COVID-19 testing.

“Within the last month, we have doubled our shipping capacity,” Bryant said. “As we continue to ramp up production, we will have the ability to help other conferences if asked.”

Back in August, when the Pac-12 postponed its season, its medical advisors had recommended the frequency of testing athletes be dictated by the seven-day rate of positive tests and daily new COVID-19 cases per 100,000 people in the counties where each school is located.

At the time, that meant Utah, Arizona, Arizona State, Southern California and UCLA would all have needed to test athletes daily. Several other schools would have been required to test every other day.

Scott said when the conference made its decision to postpone fall sports it did not think it would have access to this kind of rapid testing until November at the earliest.

The conferences forging ahead with football starting this month — including the Big 12, Atlantic Coast Conference and Southeastern Conference — have indicated they plan to test their football players three times per week.

“Having the opportunity and ability to identify and immediately remove someone who has the potential to be infected prior to stepping on the practice field really reduces the risk and removes the gap that currently exists with traditional laboratory testing,” said Dr. Doug Aukerman from Oregon State. He leads the Pac-12′s medical advisory committee.

A Jan. 1 return to competition could also put the Pac-12 behind the rest of the country in basketball. Basketball season typically starts in early November, but Scott said the NCAA is looking into delaying until November or early December.

“So I’m very optimistic that we’ll have a season," Washington basketball coach Mike Hopkins said. "I think we definitely will, especially with the way that this testing and this partnership is moved forward.”

The Big Ten postponed fall sports the same day as the Pac-12. While the Big Ten has been getting crushed with criticism from all sides, including a lawsuit by Nebraska players demanding its decision be overturned, the Pac-12 has presented a a unified front in support of postponing.

Scott said he considers it a “high priority” for the Pac-12 and Big Ten, Rose Bowl partners, to align their return to football. The Big Ten has discussed plans for starting a football season as early as Thanksgiving weekend, though the conference has been more focused on an early January start.

“Not only, for our student athletes, could we have a Pac-12 championship game and champion, but it'd be awesome to have some of the traditional postseason opportunities the Pac-12 and Big Ten have enjoyed with each other over many, many decades,” Scott said.