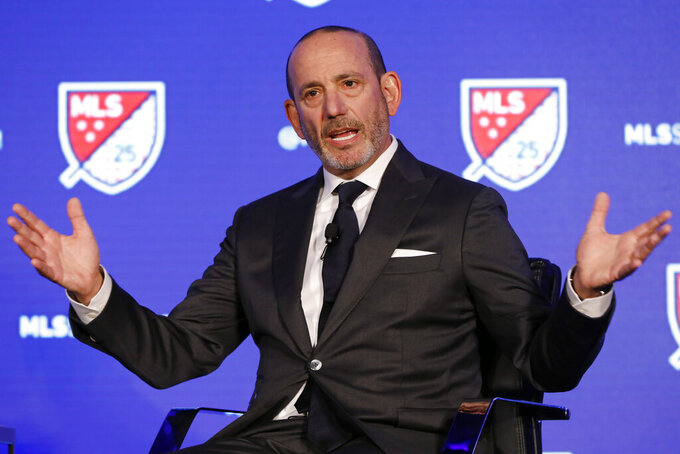 FILE - In this Feb. 26, 2020, file photo, Major League Soccer Commissioner Don Garber speaks during the leagues 25th Season kickoff event in New York. Garber said while Major League Soccer is on track to have losses nearing $1 billion because of the coronavirus, he's proud of how the league was able to navigate the pandemic and complete a difficult season. Garber gave his annual state of the league address on Tuesday, Dec. 8, 2020, in advance of the MLS Cup final on Saturday between the Seattle Sounders and Columbus Crew.(AP Photo/Richard Drew, File)

Commissioner Don Garber said while Major League Soccer is on track to have losses nearing $1 billion this year because of the coronavirus, he's proud of the way the league was able to navigate the pandemic and complete a difficult season.

Garber gave his annual State of the League address Tuesday in advance of the MLS Cup final Saturday between the Seattle Sounders and Columbus Crew in Ohio.

The league was shuttered by the pandemic on March 12 but it went on to hold the MLS is Back tournament in a bubble in Florida this summer before returning to local markets for an abbreviated season.

Garber first projected in June that league losses would be $1 billion, and with the season nearing a close he said lost revenues were indeed approaching that number.

“Not only have we lost a significant amount of revenue, as have so many other businesses, certainly in our industry, but we’ve also incurred expenses that we were not intending to incur. We chartered players to every game -- that’s not currently part of our CBA. We had the expense of managing the MLS is Back tournament,” Garber said. “And while that was able to allow us to capture some revenue, the expenses of housing so many players and operating those games and creating the virtual stadiums were enormous. So actually, the impact of all this is probably deeper than what we expected and that is concerning to us.”

Garber said the league and its teams have tried to offset the losses with “traumatic” layoffs of 20% of the league's staff, individual club layoffs and a 5% pay cut across the board for players. But the reality is the league is reliant on game-day revenue, which has been drastically cut during the pandemic with fewer matches and either no fans or limited crowds allowed at games.

“We are concerned about what this will look like leading into 2021 and are working, as I’m sure everybody could imagine, on figuring out how we could manage through that," Garber said. “I am very, very hopeful that 2021 will be a way better year that ’20, because I don’t think any business could sustain the kind of impact that we sustained in 2020 for two years in a row.”

Garber said the current target remains to start the 2021 season in early or mid-March.

Garber would not say whether the league would invoke the clause that was included in the collective bargaining agreement with the players that would allow either side to withdraw from the deal and renegotiate if adverse economic conditions exist. The league and the MLS Players' Association agreed to the new CBA in February, but it was never ratified and the deal was reworked to address coronavirus concerns before the MLS is Back tournament.

“We negotiated hard for that clause, but at this time, there’s nothing really for me to add as to when and if that clause would be triggered,” he said.

Garber touched on numerous other issues during his address.

He said it was too soon to determine whether the Canadian teams would be able to play at home next season. The Montreal Impact, Toronto and the Vancouver Whitecaps all relocated to stadiums in the United States for the season because of COVID-19 travel restrictions.

Garber also addressed the sale of Real Salt Lake. Owner Dell Loy Hansen announced he was selling United Soccer holdings in August after reports surfaced that he had made racist comments. MLS will likely take over the sales process in the next 30 days, Garber said.

“There are interested parties in discussion with with us about buying Dell Loy Hansen's interest in the club and the Monarchs (USL)," he said. "As you know, the Royals (of the National Women's Soccer League) announced that they will move to Kansas City. That team has already been sold. So nothing further to announce on that. But discussions continue to be ongoing and frankly, productive.”

While Orlando City's majority owner Flavio da Silva has said he would be open to discussing a sale of his interest in the team, Garber said nothing is imminent.

The commissioner also said he was proud the league was among the first pro sports to play amid the pandemic, albeit in the Florida bubble, and then return to local markets. He pointed to the league’s television ratings holding steady while other sports have seen a decline.

“The future of MLS is very bright,” Garber said. “We’ve going to be here, bigger, better and stronger in the years to come."