Gators' Johnson settles in as 'Coach Key' after collapsing 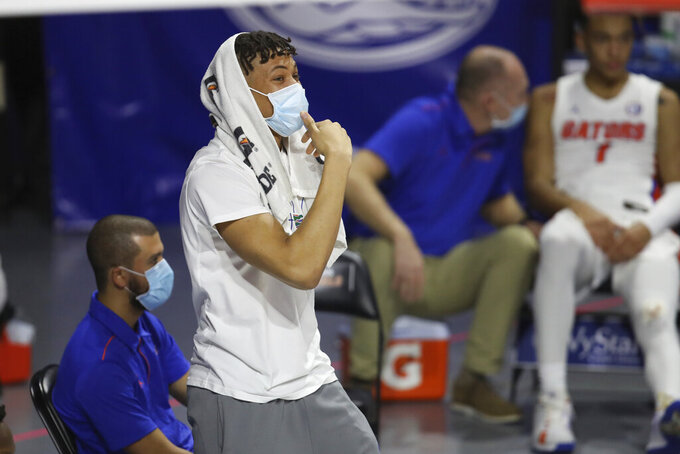 Florida's Keyontae Johnson is shown on the sidelines during the second half of an NCAA college basketball game Tuesday, Jan. 19. 2021, in Gainesville, Fla. Florida standout Keyontae Johnson has one of the best seats in the O’Connell Center. He’s just a few feet from the court, close enough to hear calls, see screens coming and know where the ball needs to go next. (AP Photo/Matt Stamey)

GAINESVILLE, Fla. (AP) — Florida standout Keyontae Johnson has one of the best seats in the O’Connell Center. He’s just a few feet from the court during basketball games, close enough to hear calls, see screens coming and know where the ball needs to go next.

He’s into every possession, too, so much so that he keeps standing up. He takes a few steps forward, inching closer and closer to the baseline, and eventually finds himself on the floor. It’s just his toes at first, then both feet. An assistant grabs him by the leg of his pants and gently tugs.

It works for a few minutes, but Johnson ends up back on the hardwood. It’s where he wants to be. But getting back there since he collapsed during a game will take time — and patience.

For now, he has to settle for being “Coach Key.”

“He’s really embraced it,” coach Mike White said Friday, a day the Gators (7-4, 4-3 Southeastern Conference) play at Georgia (9-4, 2-4). “He’s walking around in practice, ‘What do you think about this? Coach, I’m not sure that we ought to put this guy maybe in this situation. What if we did?’

“He’s just incredibly mature and confident, and I think he’s really comfortable in his new role with approaching anyone on staff and giving thoughts and ideas.”

Johnson collapsed during a game at Florida State six weeks ago, crumpling face-first onto the floor as the teams came out of a timeout. Teammates, coaches, opponents and fans watched in shock as the SEC's preseason player of the year became a trauma patient.

He spent two nights in a hospital before being airlifted back to Gainesville with his mother by his side. His recovery was a slow process. He was brought out of a medically induced coma, Johnson’s grandfather told USA Today. He was able to follow simple commands. He started breathing on his own. He chatted with friends and teammates via FaceTime.

He made his first public comment on Dec. 18, thanking everyone for their prayers and support. His lower lip was swollen, and he had an intravenous fluids line in his right arm. He was released four days later, 10 days after his collapse and in time to spend Christmas with his family and then be on hand for Florida's first practice following a two-week hiatus.

His family vowed to share information “we think could help others,” but it’s been a month without another update.

“As much as everyone involved wants firm answers, the process to draw definitive conclusions continues, and we ask for patience as the medical professionals continue their work,” the family said.

Johnson did test positive for COVID-19 late last summer and the coronavirus can lead to myocarditis, a viral infection of the heart muscle. At its most severe, myocarditis can lead to sudden cardiac arrest and has been a documented cause of death for young, otherwise healthy athletes.

The SEC mandates protocols, including rigorous heart testing, before players can be cleared to return to play following positive COVID-19 tests.

Florida also administers heart screenings to all incoming athletes and re-checks athletes’ hearts heading into their third and fifth years. Johnson was entering his third season, so he would have had a heart ultrasound (echocardiogram) and heart tracing (EKG) before he arrived on campus this summer and again after testing positive for COVID.

The situation has the Gators facing a dilemma: They have to abide by privacy laws which restricts the school from sharing potentially helpful information during a global pandemic. There is also the possibility of a potential lawsuit stemming from clearing Johnson to practice and play.

In the meantime, Johnson is trying to make the most of his new role. And the Gators are having to make do without their best player.

Johnson works as a ball boy during shootarounds and warmups. He’s a 6-foot-5, 230-pound cheerleader during games. He also shouts as much as any assistant, spends extra time with teammates during timeouts and is among the first to celebrate big shots.

“He’s obviously empowered because of his leadership qualities, his experience, his intelligence level,” White said. “His words hold a lot of weight with these guys, as they should.”

After Florida stunned No. 6 Tennessee on Tuesday night without two starters, Johnson orchestrated a water-bottle shower for White as the coach entered the locker room.

“Yeah, well, he took a big step backward when he decided to douse his coach with cold water and I didn’t even have a change of clothes,” said White, who drove home soaking wet in 30-degree weather.

White would love to have Johnson back on the floor, although that’s unlikely to happen this season as the junior from Norfolk, Virginia continues to be regularly evaluated.

“Coach Key,” at least, gets to help the Gators as they work to reinvent themselves, whether it's scouting opponents, pushing teammates or refereeing scrimmages.

“He had so much going for him and he hit a wall, but he pushed through it and is doing well right now," teammate Colin Castleton said. “He doesn’t have his head down. ... (Coach) talks to us every day and tells us this can be taken quickly.”