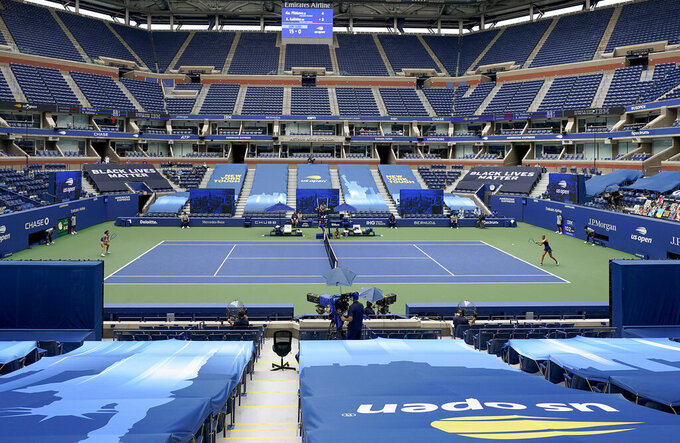 Karolina Pliskova, of the Czech Republic, right, returns a shot to Anhelina Kalinina, of the Ukraine, during the first round of the US Open tennis championships, Monday, Aug. 31, 2020, in New York. (AP Photo/Frank Franklin II)

NEW YORK (AP) — Coco Gauff won over New York and became an instant fan favorite during her run of inspired tennis a year ago at the U.S. Open. A year later, no fans, no energy, and no singles victory for Gauff — the teen sensation is out of the U.S. Open on Day 1.

Anastasija Sevastova knocked off the 16-year-old Gauff in three sets, 6-3, 5-7, 6-4. The 31st-seeded Sevastova sent Gauff to her earliest exit from a Grand Slam tournament in four appearances. She had never lost in the first two rounds.

“Just the beginning,” Gauff said Monday. “I just got on tour a little over a year ago, so I still have a lot to learn and a long ways to go.”

She’s good enough at 16 to impress a veteran like Sevastova.

“I wish I would play like this when I was 16 years old,” Sevastova said with a laugh. “Great player. Nothing more to say. I think she maybe started a bit slower than me, but she was getting better as the match went on.”

Gauff lost in Louis Armstrong Stadium, where she won two matches last year and made it to the third round before losing to 2018 champion Naomi Osaka in a match that ended in tears for the teen and a hug from the winner.

After collecting a singles trophy at Linz, Austria, in October — becoming the youngest WTA title winner since 2004 — Gauff began the 2020 Grand Slam season by defeating Venus Williams and winning a rematch against Osaka at the Australian Open en route to the fourth round there.

Gauff was largely off her game against Sevastova and had 13 double-faults, an unsettling result after she also lost in the first round in the Western & Southern Open, the tournament that preceded the U.S. Open at the same site.

She was also beaten at Lexington, Kentucky, this month in the semifinals of her first tournament after tennis was suspended because of the coronavirus pandemic.

“The main part that hurt was just getting matches under my belt, getting experience,” Gauff said. “That’s what I need on tour. I’m playing against people older than me who have been in more situations, difficult situations, than I have. I think the biggest thing is I just need experience.”

Gauff, though, has found her voice on social issues and delivered an impromptu speech at a Black Lives Matter rally in Florida in June, when she implored the audience to vote. Gauff said she wanted to continue to speak out on racial injustice and police brutality.

“I feel like, especially my generation, has been popular to speak out, not be afraid to use our voice,” she said. “I think that just has something to do with it because other young people my age are also using their voice. I’m not as afraid to use it.”

Sevastova had been 1-8 in singles in 2020 and got the breakthrough win she needed again in New York. Sevastova was a semifinalist at the U.S. Open two years ago.

“I think it’s tough for everybody coming here,” she said. “But, yeah, this first hurdle, I won a match again. I think it’s going to give me a bit of confidence.”

THROW IN THE TOWEL

Towel service is on a break at the U.S. Open.

The days of grabbing a towel from a ballperson between points have gone the way of fans and post-match handshakes in this pandemic-altered tournament.

Like a toddler with a security blanket, some players need that constant towel break in the heat of action as part of the routine. Some players want a towel after every point — but because of the pandemic, players now need to fetch their own towels. There were boxes behind the baselines for players to lay the towels on at some courts; at others, players draped them over a fence or an advertising placard.

“I have sort of like a history with the towel. I used to have a towel when I was 3, 4 years old and I would always carry it around,” said Stefanos Tsitsipas, who won his first-round match. “It was like my toy, basically. The towel resembles something special in my life. It does provide some sort of amount of comfort.”

Hailey Baptiste found herself out of sorts without the towel exchange and soon out of the U.S. Open with a first-round defeat.

“I think it definitely puts a little more pressure on you with the time because you have to go back and forth to get it yourself,” Baptiste said. “Some points, you kind of catch yourself rushing or you have like a few seconds left and you’re running up or just kind of rushing your routine.”

Croatia’s Borna Coric was among those who tested positive for COVID-19 during a no-distancing charity event organized by Novak Djokovic in June. He had mild symptoms, fully recovered, and in retrospect realizes it was a mistake to play without taking precautions.

“There were some mistakes which we all did, including me,” he said Monday, following a 7-5, 6-3, 6-1 win over Pablo Andujar. “I think we all got a little bit loose and we can just relax.”

Part of the attraction of the event was a chance to play near his hometown in Croatia.

“I was sad it finished that way but it was for a good cause so I don't have any regrets," he said.

Anhelina Kalinina was in a quandary. Should the 145th-ranked Ukrainian make the long trip to New York for the U.S. Open not knowing whether she'd be in the field?

She took a chance that paid off, even though she lost in the first round.

Kalinina was on court for only 62 minutes during a 6-4, 6-0 loss to top-seeded Karolina Pliskova on Monday morning. She set off for New York needing help reaching the field — she was fifth in line for a slot — but moved in when other players dropped out.

“Suddenly out of nowhere I was in, so actually it was a great decision,” she said.

It wasn’t entirely a bad day’s work for Kalinina: She still pockets $61,000 for a first-round loss. She had limited practice time and hadn't played a match because of the COVID-19 precautions.

“Where I'm practicing, we don't have opportunities — not like here,” she said.