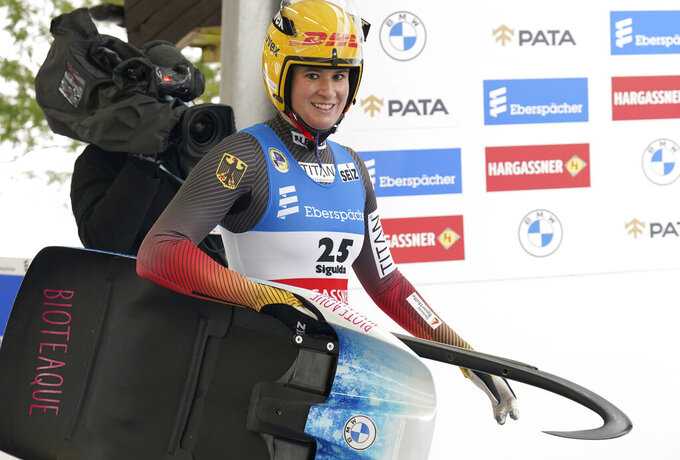 ST. MORITZ, Switzerland (AP) — Germany’s Natalie Geisenberger is a World Cup winner once again, just in time for the Olympics.

Geisenberger got her first win of the season and 52nd singles victory of her career on Sunday, holding off Madeleine Egle of Austria and Elina Vitola of Latvia in the final women’s race on the World Cup schedule.

Germany’s Julia Taubitz was fourth, good enough to hold off Egle for the season points title. Taubitz finished the year with 979 standings points, 32 more than Egle — who finished the season on a run of eight consecutive top-three finishes in World Cup races — and 207 more than Geisenberger, who was third in the overall standings.

Geisenberger has now won a race in 13 consecutive seasons, excluding 2019-20 when she sat out the year for the birth of her first child. And St. Moritz became the 15th different track on which she’s won a World Cup, world championships or Olympic race.

Emily Sweeney was the top American, finishing 17th. Ashley Farquharson was 23rd and Summer Britcher, who was racing with a broken finger, was 24th.

The U.S. did not have a team in the relay.

The World Cup sliding season is complete. The Olympics start with the first two runs of the men's luge competition on Feb. 5.