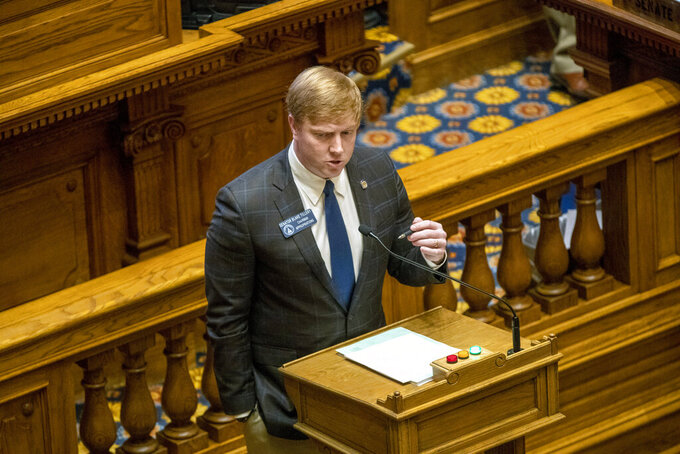 FILE - In this Feb. 11, 2021 file photo, Chairman of the Senate Appropriations committee Sen. Blake Tillery, R-Vidalia, presents an amendment to HB 80 in the Senate Chambers during the Georgia legislative session at the Georgia State Capitol building in Atlanta. The Senate voted 54-0 on Tuesday, March 23, to pass House Bill 81, which calls for Georgia to spend $27.3 billion in the year starting July 1. That puts back a fraction of the $2.2 billion that lawmakers cut last year when they feared a big drop in tax revenue. (Alyssa Pointer/Atlanta Journal-Constitution via AP)

ATLANTA (AP) — Georgia senators are supporting a 2022 budget that seeks money for after-school care and domestic violence shelters as well as more pay raises for state troopers, leaving House and Senate negotiators to work out relatively minor differences in their spending plans before they can send it to Gov. Brian Kemp for his signature or veto.

The Senate voted 54-0 on Tuesday to pass House Bill 81, which calls for Georgia to spend $27.3 billion in the year starting July 1. That puts back a fraction of the $2.2 billion lawmakers cut last year when they feared a big drop in tax revenue because of the coronavirus pandemic, although billions of incoming federal aid may hide some remaining gaps.

“That will far dwarf any additions and it will wipe out any reductions we made during the pandemic when our budgets were in a little bit of a crisis mode," said Senate Appropriations Committee Chairman Blake Tillery, a Vidalia Republican.

A majority of cuts to K-12 education would be restored. But most other cuts would stay, with state spending still below what lawmakers had originally planned for this year. The state would spend $27.3 billion in state tax money, plus billions more from the federal government, fees and tuition. That’s up from $26.6 billion in state money this year.

Tillery noted $4.2 billion in federal funds going directly to local schools would more than cover the remaining $400 million gap in the amount called for by the state's K-12 funding formula.

“Never, ever, ever else in history would we expect the government to put down that much money, but they did, and then they did more," he said.

Tillery said state revenues have come in well above what was expected. But he warned that federal funds would end and that state revenues might still be cut down by delayed income tax refunds.

The House and Senate are agreeing to some key Kemp initiatives, including plans to spend $40 million on a rural innovation fund and $10 million to extend high-speed internet in rural areas.

As in the House, Democrats complained that Georgia is passing up a chance to expand Medicaid to provide as many as 500,000 people with health insurance. The federal government has offered to pay the first two years of the state share for Georgia and 11 other states that have not expanded Medicaid.

“We wouldn’t even have to adjust the budget in terms of offsetting of costs because it doesn’t cost anything," said Sen. Jen Jordan, an Atlanta Democrat.

The spending plan would provide pay increases to state troopers, bank examiners, food inspectors and driver's license employees. The Senate disagreed with the House plan to give additional raises to assistant district attorneys, but added about $1.3 million for extra pay for state troopers who earn certain educational credentials. That's on top of a House plan to add additional ranks so veteran troopers can get a pay increase. The budget would also restore Kemp’s proposal to spend $3.1 million for a 75-person state trooper school.

Senators want to create a therapeutic foster care program that would provide special care and counseling to some foster children with emotional, behavioral, or medical needs, spending $6.7 million. It would also create a $4.7 million after-school care program.

The Senate would spend $2.35 million more to pay for a law clerk for every superior court judge.

The Senate would spend nearly $1 million more on domestic violence and sexual assault centers, with Tillery saying those operations are facing a funding crunch.

Kemp and not lawmakers will decide how to spend more than $4.6 billion in federal aid flowing directly to the state will be spent.

Senators asked the Republican governor to aid people and businesses hurt by the pandemic, provide extra pay to essential workers, and to improve water, sewer and internet facilities, in addition to offsetting revenue reductions.