Georgia could cut jobless benefits to push more toward work 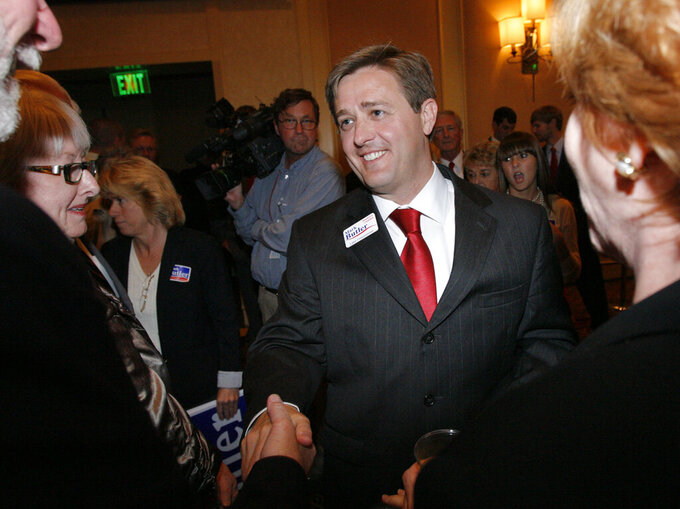 FILE - In this Tuesday, Nov. 2, 2010, file photo, then-Republican candidate for Georgia commissioner of labor, Mark Butler, center, talks to supporters during an election-night party, in Atlanta. Butler, Georgia’s labor commissioner, says he’s considering cutting federal benefits to workers in an effort to push them back to work. Butler and Gov Brian Kemp met Monday, May 10, 2021, and discussed possibilities such as cutting the $300-a-week federal supplement to unemployed workers or cutting off federal benefits to people not usually eligible for state unemployment. (AP Photo/John Amis, File)

ATLANTA (AP) — After announcing last week that he plans to require people receiving unemployment benefits to resume searching for work, Georgia's labor commissioner now says he's considering cutting federal benefits to workers in an effort to push them back into the workforce.

Kersha Cartwright, a spokesperson for elected Republican Mark Butler, said Butler and Gov. Brian Kemp met on Monday and discussed possibilities such as cutting the $300-a-week federal supplement to unemployed workers or cutting off special federal benefits to people not usually eligible for state unemployment.

“I think the governor's office and the commissioner are agreed that a major reduction in some programs, if not all programs, is needed," Cartwright told The Associated Press. “Everything's on the table for discussion.”

Mallory Blount, a spokesperson for Kemp, said "to expect final decisions on timing and other specifics in the coming days.”

“For our state’s economic momentum to continue, the commissioner of labor must do more to match employers with job seekers and make policy decisions that encourage more Georgians to return to the workforce,” Kemp wrote in a statement vetoing a bill lawmakers passed earlier this year that would have cut Butler’s authority.

Butler has the legal authority to reject the benefits, but is consulting with Kemp. Butler could also decrease the amount of money someone can earn and still qualify for benefits. Butler set that amount at $300 a week when the pandemic began, meaning people who are working reduced hours can still qualify for the $300-a-week federal boost.

Butler said last week that he would reinstate work search requirements “in the next few months,” but didn’t say when. He promised he would give advance notice.

Alabama and Mississippi on Monday became the latest states to announce they would withdraw from the $300-a-week federal assistance, joining South Carolina, Arkansas and Montana.

The Georgia Chamber of Commerce and a number of other business groups on Monday called for suspending the benefits, saying that getting unemployed men and women “connected to employers and back to work is the first step” to solving a labor shortage.

“Because they cannot find labor, businesses are starting to turn down orders, raise prices, and some are even considering closing permanently,” the business groups wrote. "Many restaurants are only offering drive-through, pick-up service, not because of COVID, but because they cannot find enough workers to support full-scale operations.

Kemp wrote that he “understood the frustration” of lawmakers, who have been besieged by constituents complaining of unresolved unemployment claims. But Kemp said the new office would be an unconstitutional intrusion of the legislature into the executive branch.

“Rather than creating a new chief labor officer position that reports directly to the legislature, I believe we should work with the labor commissioner to identify the challenges his agency," Kemp wrote.

About 25,000 Georgians filed new unemployment claims in the week ended May 1, and about 140,000 people are receiving traditional unemployment benefits from the state program. Another 127,000 Georgians were getting special federal assistance available to people who were self-employed, independent contractors, gig workers, or employees of churches and nonprofits. Some states are also quitting that program, which was created to help people ineligible for traditional unemployment benefits.

Defenders of extra benefits say the labor market is still disrupted by COVID-19, particularly because mothers may be staying home with children.

The Georgia business groups acknowledged there may not be enough workers to meet employers' needs. Besides cutting benefits and requiring people to look for work, they called for rapid retraining of jobless workers, and using federal funds to help provide childcare. The business groups also called for long-term fixes such as more visas for foreign workers, helping college students find work and a review of the state's educational system focusing on updated skills.