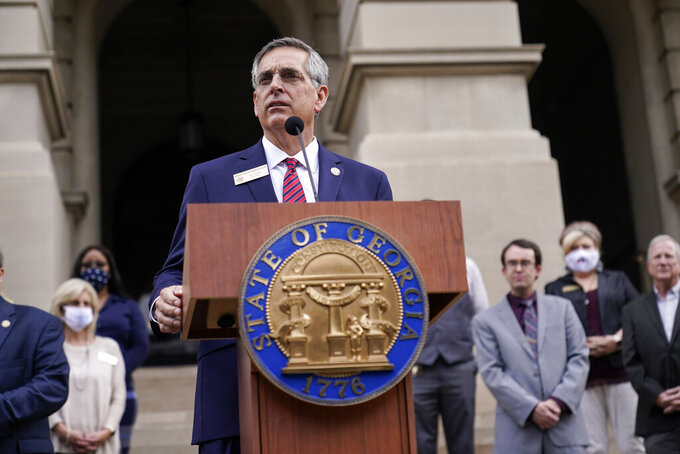 ATLANTA (AP) — As Georgia counties prepare for a hand tally of the presidential race, the state's top elections official planned to quarantine after his wife tested positive for the coronavirus, his office said Thursday.

The count stems from an audit required by a new state law, not because there are any questions about the integrity of the election in Georgia or the results. Democrat Joe Biden leads Republican President Donald Trump by 14,000 votes. There are no examples of similar recounts that have overturned leads of that magnitude.

“The point of the audit is to show the machines counted the ballots fairly,” said Gabriel Sterling, who oversaw the implementation of the state's new voting system for the secretary of state's office.

County election officials must begin the hand tally by 9 a.m. Friday and complete it by 11:59 p.m. Wednesday, state officials said. The state certification deadline is Nov. 20.

Raffensperger has been under fire from fellow Republicans.

U.S. Sens. David Perdue and Kelly Loeffler on Monday called for his resignation, claiming he ran the election poorly but citing no specific incidents of wrongdoing. Both senators face Jan. 5 runoffs that will determine which party controls the Senate.

Raffensperger said he would not step down and defended his office's handling of the election.

U.S. Rep Doug Collins, who's leading Trump's recount team in Georgia, and state Republican Party Chairman David Shafer on Tuesday sent a letter to Raffensperger requesting that he order a hand recount of Georgia’s nearly 5 million ballots before certifying the results, among other demands.

That has led to criticism accusing Raffensperger of caving to Trump. An audit of one race is required by law but it's up to the secretary of state to choose the race. Sterling emphatically denied that the selection of the presidential race and subsequent decision to do a full hand count was the result of pressure from the president.

“Even before the Trump campaign was talking about the possibility of a recount or recanvassing, we knew that there was a specific purpose for an audit in the law. That specific purpose was to instill confidence in the outcome of that election,” Sterling said at a news conference Thursday.

The audit is a new requirement that was included in a 2019 law that also provided guidelines that the state used to purchase a new election system from Dominion Voting Systems for more than $100 million. Doing a hand count of the nearly 5 million votes cast in Georgia during the Nov. 3 election is a massive task.

“It’s a tremendously bold undertaking, to hand count every ballot cast in a presidential contest, on basically an entirely new voting system, in the middle of a pandemic. It’s not a small enterprise,” said Mark Lindeman, the interim co-director of Verified Voting, a nonpartisan group that tracks voting technology and is providing technical support for Georgia’s audit.

Chris Harvey, elections director for the secretary of state's office, sought during a training call Thursday to assuage any apprehension county election officials might be feeling.

“Keep in mind through all this stuff what we’re doing is relatively simple," he said. "We’re identifying votes and counting pieces of paper.”

For the audit, county election staffers will work with the paper ballots in batches, dividing them into piles for each candidate. Then they will count each pile by hand, Fuchs said. Sterling had said Wednesday that the ballots would be counted by machine.

During the training call, county election officials were shown a video with children demonstrating how it would work.

For the tally, ballots are distributed in batches to teams of two auditors. The first auditor picks up the ballot, reads the selection for the presidential race out loud and passes it to the second auditor who also reads the name out loud before putting it in a pile corresponding to that candidate, according to the video.

Some ballots are set aside to be checked by a bipartisan review panel, including those where the auditors can't agree on the voter's intent and those with write-in candidates.

Once the auditors finish sorting the ballots into piles, the first auditor picks up a ballot and counts it out loud before passing it to the second auditor who does the same as they sort the ballots for each candidate into piles of 10 for easy tallying, according to the video.

After they've counted all the votes, they record the total for each candidate and return the ballots to their box.

The process of deliberately saying the candidate name and count out loud is meant to help avoid mistakes, said Ginny Roest with VotingWorks, a nonpartisan nonprofit organization that focuses on building a voting and auditing system and is helping the secretary of state's office.

Sterling said the final numbers found in the audit count will almost definitely be slightly different than the numbers previously reported by the counties but that the overall outcome should remain the same. The results will not be released piecemeal as the counties finish counting but instead will be announced once the full tally is complete, he said. The results of the new count from the audit is what will be certified.

There is no mandatory recount law in Georgia, but state law provides that option to a trailing candidate if the margin is less than 0.5 percentage points. Biden’s lead stood at 0.28 percentage points as of Thursday afternoon.

Once the results from the audit are certified, the losing campaign can request that recount, which will be done using scanners that read and tally the votes, Raffensperger said.