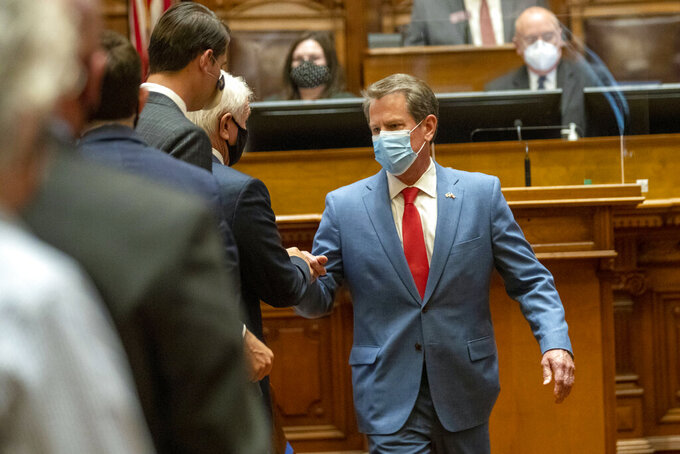 FILE - In this Friday, June 26, 2020, file photo, Georgia Gov. Brian Kemp is greeted as he visits the House Chambers on Sine Die, day 40, of the legislative session in Atlanta. Kemp says he hasn’t yet weighed whether the state will take legal action against local governments trying to impose mask requirements. The Republican held a news conference Wednesday, July 1, 2020, before departing on a statewide tour to promote wearing a mask, but said he won’t mandate it. (Alyssa Pointer/Atlanta Journal-Constitution via AP, File)

ATLANTA (AP) — Georgia Gov. Brian Kemp says he has not yet weighed whether the state will take legal action against local governments that try to impose mask requirements, as Georgia faces a spike in confirmed coronavirus cases and hospitalizations.

The Republican governor held a news conference Wednesday morning before departing on a statewide tour to promote wearing a mask, but said he will not mandate it. At the same time that Kemp spoke, Savannah became one of the first cities in the state to require people to wear a mask inside stores and other public places or face a fine.

“I wouldn’t be able to speak to any state action because I haven’t had time to discuss the matter with our legal team," Kemp said. “But regardless of what legal action may or may not happen, we shouldn’t get to that ... We shouldn’t need a mask mandate for people to do the right thing.”

Savannah Mayor Van Johnson saw things differently, saying “I do not believe that we have any other choice” while announcing on Tuesday an emergency order requiring a mask be worn by anyone entering a business in the city.

That order could set up a battle between local officials and the state. A series of executive orders from Kemp have prohibited local governments from setting coronavirus restrictions that go beyond those imposed by the state.

Georgia has seen a startling surge in confirmed cases of the coronavirus in recent weeks. While other states seeing an increase, such as Florida, Arizona, Texas and California, have moved to reverse reopenings or impose new restrictions, Kemp has steadfastly declined to do so, saying the restrictions already in place are sufficient.

Georgia has had nearly 85,000 total confirmed cases of the coronavirus, according to data released Wednesday from the state Department of Public Health, though experts say official counts likely only capture a fraction of those infected. Georgia has had at least 2,827 deaths.

New daily confirmed cases in the state have been steadily trending upward since May, after a short period of decline between late April and early May that followed a since lifted stay-at-home order from Kemp. Cases have increased sharply in recent weeks.

There were 1,570 people hospitalized in Georgia with the virus Wednesday, up from 1,124 people a week earlier.

Georgia has been among the most aggressive states in the country in allowing businesses to reopen amid the pandemic, with Kemp giving the green light to places including tattoo parlors, hair and nail salons and bowling alleys in late April. Restaurants, retail stores and bars have also reopened with restrictions.

Savannah’s mask order does not apply to those age 10 and under or when a person is eating or drinking, and anyone who cannot wear a mask because of physical or medical reasons is exempt. Violators face fines of up to $500.

For many, the coronavirus causes moderate symptoms. But for some, especially older adults and people with existing health problems, it can cause more severe illness and death.