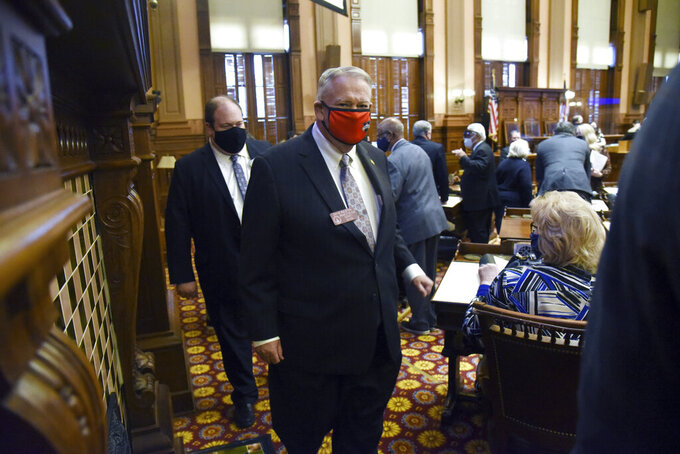 David Ralston, Speaker of the House, leaves after the session adjourned on the House Chambers during the second day of the 2021 legislative session at the Georgia State Capitol, Tuesday, Jan. 12, 2021, in Atlanta. (Hyosub Shin/Atlanta Journal-Constitution via AP)

House Bill 593 also appealed to Democrats because it would aid taxpayers who earn relatively little money, despite misgivings by some advocates who think the state needs to raise more taxes to finance adequate services.

“This is a modest, measured increase that gives Georgians some tax relief and affects the most number of Georgians, allows them to keep some of their own money," House Ways and Means Committee Chairman Shaw Blackmon, a Bonaire Republican, told representatives.

The measure is being pushed by House Speaker David Ralston, a Blue Ridge Republican with a history of supporting tax cuts.

If approved, the bill would take effect beginning Jan. 1, 2022, which means the change would not fully hit the budget lawmakers are writing now, which will end on June 30, 2022.

Before the pandemic scrambled state revenues last year, Ralston was eyeing a larger tax cut, a second reduction in the state’s top income tax rate. With state finances rebounding, Republicans have been talking about resuming that effort.

When the first phase of the tax cut was passed, lawmakers envisioned the additional quarter-percentage decrease to 5.5% this year. Ralston still supported it, but some senators expressed doubts. Analysts estimate the state would forgo $500 million to $550 million in revenue from another cut.

House lawmakers also agreed to two bills with tax breaks for businesses by wide margins. Both measures move to the Senate, which has been more skeptical of tax breaks in recent years.

House Bill 587, which passed 157-14, includes a tax break for pharmaceutical and medical equipment makers sought by Gov. Brian Kemp in an effort to increase medical manufacturing in response to COVID-19. The measure lets some businesses who can't use all their income tax breaks dip into the employee income taxes they collect. Also included is a special tax break aimed at persuading Lockheed Martin or another company to manufacture new military planes at Dobbins Air Reserve Base in Marietta.

House Bill 586, which passed 164-6, exempts tickets for museums and nonprofit performing arts from sales taxes until the end of 2022, with House members saying that would aid the recovery of fine arts groups from COVID-19. It would also exempt parts for concrete mixing trucks from sales taxes and continue a tax break on the repair of expensive yachts.