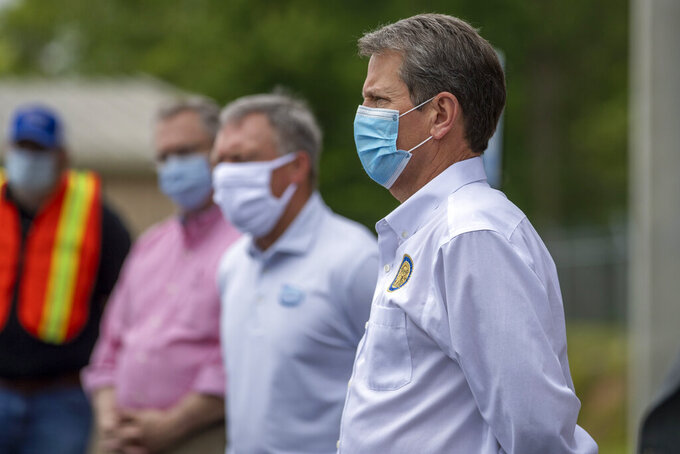 Governor Brian Kemp wears a mask during a presser outside of Fieldale Farms in Gainesville, Ga. Friday, May 15, 2020. (Alyssa Pointer/Atlanta Journal-Constitution via AP)

ATLANTA (AP) — Georgia lawmakers came closer Thursday to tighter oversight of tax breaks for television and film production, even as they proposed other new incentives for businesses.

Senators moved to award a $1,250-a-job tax break to manufacturers of personal protective equipment, while a top House Republican briefly sought to give investors tax breaks for loaning money to Georgia businesses.

The moves illustrate the continuing push-pull over using Georgia's tax code to lure businesses to the state. Lawmakers have been considering a plan for a comprehensive study of business tax breaks after Gov. Brian Kemp vetoed a similar study last year. Yet with only hours remaining in the 2020 legislative session, efforts to seek such an overview were in doubt.

Senators approved House Bill 1037, which would require audits of film productions in Georgia before they could receive tax credits. The measure now goes back the House for that chamber to consider Senate changes

The credit, which rebates up to 30% of a production’s value, cost nearly $900 million in foregone tax revenue last year as movie and TV production boomed in Georgia.

But two audits this year were highly critical of the tax credit, finding that some companies receiving tax credits didn’t earn them. Georgia now requires no audit and relatively little documentation of industry spending, despite giving out more in subsidies than any other state. A company spending $1 million gets up to $300,000 tax credits, which it can use to defray taxes or sell to others who can then use them to defray taxes.

The Senate also passed House Bill 846, sending it back to the House for more debate. The measure would give tax credits to makers of hand sanitizer, gloves, face shields, masks respirators and other personal protective equipment, whether they were making before or after the COVID-19 outbreak. Tax credits of $1,250 per job could be claimed for jobs created created before Jan. 1, 2025.

The measure also would let businesses that claim one of the biggest tax credits in Georgia, for creating jobs that pay above-average wages, to use either their 2019 or 2020 job creation numbers to meet their contractual job-creation obligations to the state. Supporters say businesses need a break because COVID-19 may have interrupted hiring plans.

“It is incumbent upon us as state leaders to protect job creators in the state and ensure that Georgia stands ready to respond to future public health crises with a supply of PPE that can be deployed at a moment’s notice,” Kemp said.

House Majority Leader Jon Burns, a Newington Republican, also proposed a plan that would grant tax credits to insurance companies that invested up to $100 million in Georgia businesses over two years, arguing it would help with economic recovery from COVID-19. Burns' plan was approved Thursday afternoon by the House Rules Committee but was later sent back to the committee, raising questions about its chances of moving forward.