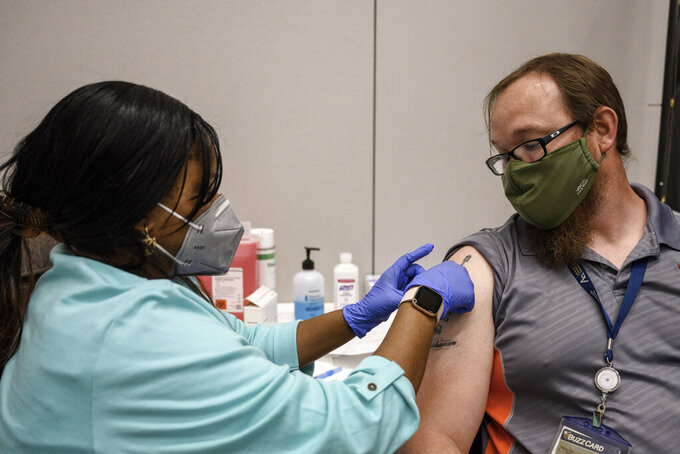 FILE - In this Thursday, April 8, 2021 file photo, Georgia Tech employee Adam Jackson receives a Pfizer COVID-19 vaccination at the Vaccination Site on the campus of Georgia Tech in Atlanta. The University System of Georgia announced Thursday, May 13, 2021 that students and employees will not be required to be vaccinated for the start of the fall 2021 semester.. (AP Photo/Danny Karnik, File)

ATLANTA (AP) — Georgia's 26 public universities and colleges do not currently plan to require students, faculty or staff to be vaccinated against COVID-19 in the fall, according to guidance issued Thursday by the University System of Georgia.

The 340,000-student university system in March asked all campuses “to plan for resuming normal operations for the Fall 2021 semester.” Thursday's guidance further elaborates on that theme, saying fully vaccinated people won't have to socially distance or wear masks, while unvaccinated people “are strongly encouraged to continue” socially distancing and wearing a mask inside. Summer classes may still socially distance, depending on what a college decides.

The universities are supposed to make sure vaccinations are available on campus or through a local partnership, but schools won't be “responsible for assessing current COVID-19 vaccination rates for their institution.”

The university system said it had made the decisions in concert with the state Department of Public Health and that they were subject to change.

The Board of Regents insisted on at least some in-person instruction in the fall and spring semesters, even awarding small amounts of money to institutions based on the number of in-person classes. Those moves came despite resistance from some employees.

Some faculty members have called for mandatory vaccination, saying the density of university campuses, especially in dormitories, remains a risk if many people are not inoculated against the respiratory illness. They also note students are required to be vaccinated against a number of other diseases.

“The Board of Regents should follow the science and impose vaccination requirements as part of on-campus operations, enable suitable exceptions as is done for other vaccines, and ensure that as-yet-unvaccinated individuals can be vaccinated as part of the Fall 2021 return to classes,” Georgia Tech biology professor Joshua Weitz wrote Monday an opinion piece in The Atlanta Journal-Constitution.

The system is also ending alternate work arrangements and telework by June 30, although summer teaching assignments are excluded. The system says alternate arrangements will not be granted because people haven't been vaccinated. Supervisors can allow telework at their discretion based on a school's needs, but “in no circumstance should telework be considered an employee right or entitlement.”

Alternate arrangements for students will also end on June 30. Traditional student life activities are expected to resume in the fall, although a ban on non-essential travel remains in place.

At the University of Georgia, for example, President Jere Morehead wrote to faculty and staff on Friday that they should be back in their on-campus offices by June 14. Morehead said, however, that supervisors can be flexible for people with childcare or other concerns through June 30.