In Georgia, a strange return to college for some students 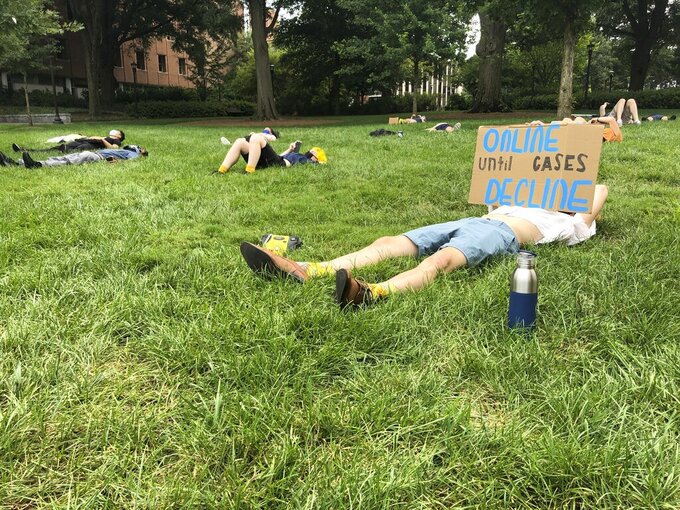 A protester holds a sign opposing in-person classes Monday, August 17, 2020, at a "die-in" at Georgia Tech in Atlanta. More of the state's public universities are opening for the fall term, trying to balance concern about COVID-19 infections against a mandate for on-campus classes citing financial needs and student desires (AP Photo/Jeff Amy)

Welcome back to campus.

France's students were absent by design. He was testing his ability to teach class remotely in a room Georgia Tech has marked off to host fewer than 150 people in an attempt to prevent the spread of COVID-19. As he struggled through the early bumps of teaching online, France told students half of the class, about 80 people, would eventually be welcome to attend once a week.

“So we'll have plenty of room in the classroom,” France said.

That scene was repeated at universities across Georgia, as six more public colleges began instruction Monday. Regents that oversee 26 schools have mandated at least some on-campus classes for the system's 330,000 students.

Of Georgia Tech’s classes, 80% will allow some in-person attendance. Students interviewed Monday said they expect to attend only a few class meetings a week in person, down from normally more than a dozen.

Kaylee Barckhoff and her dog were studying at an outdoor table. The sophomore business administration major from Roswell, Georgia, said it's a challenge to manage her schedule or find study partners. She left her off-campus apartment seeking a study space that seemed more like academia.

“You kind of want it to feel like you're in college,” Barckhoff said.

The unusual start of the semester came after some faculty and students pressed the university system to cancel in-person classes or at least allow entirely remote teaching or learning. The university system agreed to mandate masks under faculty pressure and made it a little easier for professors to work from home. But some faculty say they are still being forced into the classroom.

Russell Thackston, a professor of information technology at Georgia Southern’s Statesboro campus, said he was denied a request to teach three fall courses online to protect his wife.

“I think it’s stupid. We should be online still,” Thackston said of plans to resume in-person classes. “...One irresponsible student can likely infect dozens before they figure out that they’re sick.”

About 40 students and others, including some members of the United Campus Workers of Georgia union, held a “die-in” Monday at Georgia Tech, miming their deaths as they called on administrators to send people home, refund room and board fees and better protect employees.

“This return to campus is not safe,” Margot Paez, a doctoral student in civil engineering from Los Angeles, told protesters through a bullhorn. “This is a death march for nothing. We must fight back.”

“Additional losses of this magnitude could not only affect hundreds of jobs on our campuses, but would have a significant and potentially lasting impact on our level of service," Wrigley said.

“The majority of students are acting like they want to be in person,” Kohn said.

That's why the university “scrounged up” two dozen new classrooms, including the presidential suite in Tech’s football stadium.

Risks are real. Georgia Tech reported a dozen students with active cases last week. A video showing a Saturday night party with hundreds of young people near the University of North Georgia’s Dahlonega campus raised alarm. A professor died from COVID-19 at Georgia Southern and a worker died from it at the University of Georgia, although it's unclear where either caught the illness.

“My administration has made it very clear we need to be ready to go online at the flip of a switch,” Bowden said. “Which raises the obvious question: Why are we throwing in that extra risk when most of the students are doing most of their classes online anyway?”

But some Georgia Tech students say they need to be on campus. Daniel Akinola, a junior aerospace engineering major from North Carolina, said it can be a struggle to pay attention to online classes while he's making breakfast. But it would be worse in his family home, where 11 people live and he had to go to his mother's office to study in the summer.

“There's no way I was going to be able to study in my house,” Akinola said.

The spelling of the first name ‘Margot’ has been corrected in this story.