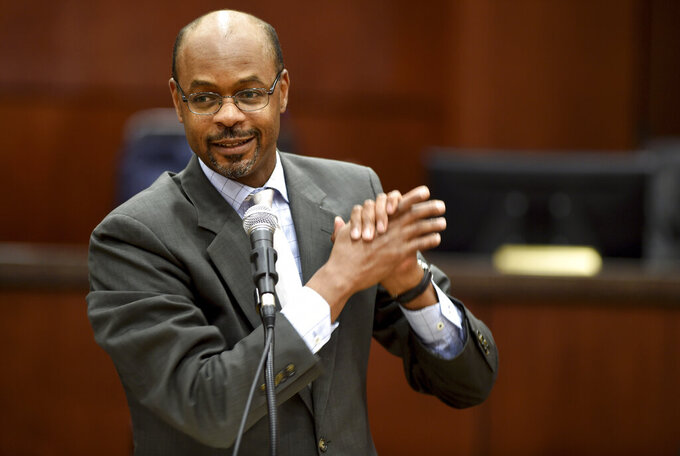 FILE - In this Aug. 26, 2019 file photo, Georgia Supreme Court Chief Justice Harold D. Melton talks about the Georgia criminal justice system at the Municipal Building in Augusta, Ga. Melton announced Friday, Feb. 12, 2021 that he is stepping down on July 1. Melton said in a statement that he did not yet know what he would do next, but that he is exploring opportunities “for the next season of life that will allow me to best serve our legal community and my extended family.” (Michael Holahan/The Augusta Chronicle via AP, File)

Melton said in a statement that he doesn't yet know what he'll do next, but that he is exploring opportunities “for the next season of life that will allow me to best serve our legal community and my extended family.”

Melton, 54, was appointed to the state's highest court in 2005 by former Gov. Sonny Perdue. He became chief justice in 2018.

He is leaving in the middle of his judicial term, and Republican Gov. Brian Kemp will appoint a replacement.

Melton is currently the only African American serving on the Georgia Supreme Court.

In recent months, Melton has grappled with the coronavirus pandemic's effect on state courts. He has been renewing a declaration of judicial emergency every 30 days that limits what court cases can be conducted in person, leading to a backlog of cases.

Kemp praised Melton in a statement, saying “Georgians in every community have benefitted from his steadfast commitment to the rule of law and public service, and I know he will continue to pursue those passions in the days ahead.”

Melton's statement said the court "is well-positioned to continue the high calling that has clearly been set before us. I have such a peace and confidence that justice will continue to be served.”