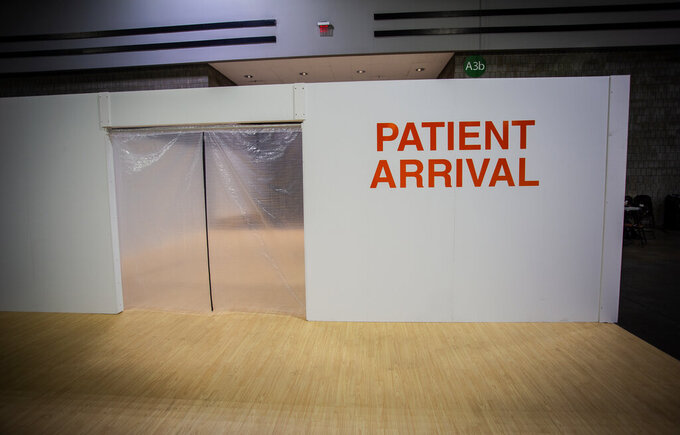 The patient arrival area at a temporary hospital is viewed at the Georgia World Congress Center on Thursday, April 16, 2020, in Atlanta. Georgia Gov. Brian Kemp took part in a tour of the 200-bed facility, constructed quickly to deal with COVID-19 patients in the lower levels of the center which normally plays host to large conventions and sporting events. (AP Photo/Ron Harris, Pool)

Later Friday, the Republican governor signed two executive orders extending the state of emergency in the fight against the coronavirus outbreak. One order extends Georgia's public health emergency through Sept. 10.

The other order extends existing requirements on social distancing, bans on gatherings of more than 50 people unless there is six feet between each person and other rules about operating businesses and nonprofit groups through August 15. However, the order also makes more than a dozen new claims about Kemp's executive authority, citing state law and the state constitution, which may be aimed at bolstering his lawsuit against Atlanta Mayor Keisha Lance Bottoms and the Atlanta City Council.

“The General Assembly has entrusted the authority to declare a state of emergency to the governor and vested him with the sole power to direct and manage the statewide response to any such emergency," Kemp's new language reads in part.

Atlanta and other local governments argue they are allowed to order people to wear masks in public and impose other restrictions, but Kemp argues they are not. An emergency hearing on Kemp's lawsuit was scheduled this week but Kemp dropped the request.

In the meantime, local governments continue to impose new restrictions. Chatham County County Commission Chairman Al Scott on Friday imposed a mask order, in direct contravention of Kemp's position. The Athens-Clarke Commission imposed new closing times on bars and ordered masks inside them on Thursday and was sued on Friday by bar owners who claim the commission illegally exceeds Kemp's orders.

The news came as critical-care bed availability across Georgia eased slightly, but as new cases, total hospitalizations and deaths remained high. The state on Friday reported that total infections now exceed 186,000, with nearly 3,200 people ill in hospitals and total deaths rising to 3,752.

Also Friday, the Centers for Disease Control and Prevention released a report documenting that of 597 adults and children who attended a Georgia summer camp in June, 260 tested positive for the illness. That was about three-quarters of the 344 people with available test results. The CDC said the outbreak “adds to the body of evidence demonstrating that children of all ages are susceptible.”

Kemp spokesperson Cody Hall said the Georgia World Congress Center would be able to care for sicker patients than when 200 beds were initially set up in part of the mammoth convention center in April. They were dismantled after hosting only a handful of recovering patients. New capabilities will include administering oxygen and medication drips to patients.

The state's remaining 80-bed temporary facility at Milledgeville will not open for now, Hall said. Georgia has also deployed smaller pods to hospitals in Rome, Gainesville, Macon and Albany.

The 3,155 people in hospitals Friday fell slightly from Thursday's record of 3,200. Critical care beds were 86% full, with some regions that had only one bed available Thursday regaining capacity. Still, five of 14 hospital regions report that more than 90% of critical care beds were full on Friday, including districts around Athens, Macon, Dublin, Valdosta and west suburban Atlanta.

“We thought we were busy back in March and April. We thought that 10 patients was a whole lot of patients that had COVID,” Don Avery, president of Fairview Park Hospital in Dublin, told WABE-FM.

The hospital's 16-bed intensive care unit has been full for most of the past 30 days, with officials seeking transfers to hospitals sometimes hours away.

“We have looked over the past couple of days — what are our options to transfer patients to Macon, to Savannah, even Augusta,” Avery said. “We have had a couple opportunities, but they are very, very limited.”

Deaths and new confirmed cases of COVID-19 remain at high levels. Georgia’s confirmed death toll rose to 3,671 Thursday, and the 14-day average of deaths rose to a record 41.

Although most people who contract the virus recover, for some it can trigger serious symptoms and be fatal.

The state is paying Grady $1.2 million to create a round-the-clock website and call center to monitor hospital availability and coordinate patient transfers.