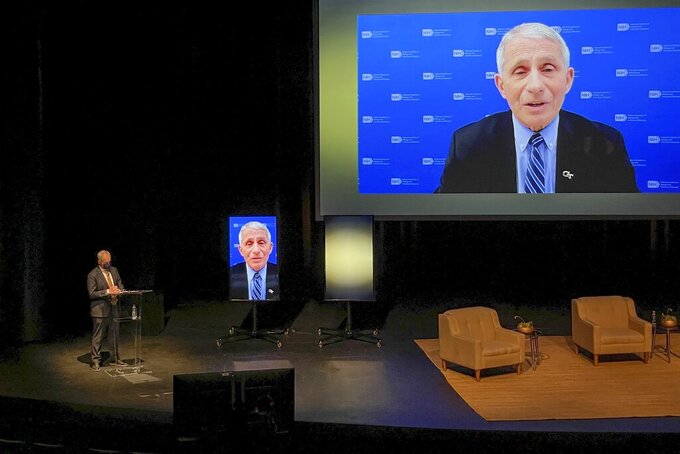 ATLANTA (AP) — Dr. Anthony Fauci, the public face of the nation's fight against COVID-19, has accepted an award that honors his courage in leading Americans through an exceptionally partisan pandemic.

Fauci, who appeared via video call, wore a Georgia Institute of Technology lapel pin during the Monday afternoon ceremony hosted by the university. He ​called the outbreak, which has raged for more than a year, the most polarizing public health crisis he’s yet endured.

“I have never in my decades-long experience seen the level of divisive that exists in the country today,” he said.

The leading infectious disease expert’s public disagreements with then-President Donald Trump as Fauci headed the White House virus task force sparked threats and vitriol. Still, he stuck to the science and told the truth even when inconvenient, making him the top choice for the award, said Georgia Tech President Ángel Cabrera.

“Thank you for a lifetime of social courage from which we have all benefited,” Cabrera added.

The Georgia Institute of Technology’s annual Ivan Allen Jr. Prize for Social Courage, named for the former Atlanta mayor, recognizes those who stick to their morals despite risk to their personal and professional lives. The late civil rights icon and longtime Georgia Congressmen John Lewis is among the former recipients.

At the ceremony’s close, Fauci tipped his hat to his many collaborators across the country.

“I get a lot of the attention,” he said. “But there are thousands of us at the Centers for Disease Control and Prevention, the National Institutes of Health and other organizations that are pulling the country out of this outbreak.”