Georgia's GOP governor under fire after US Senate losses 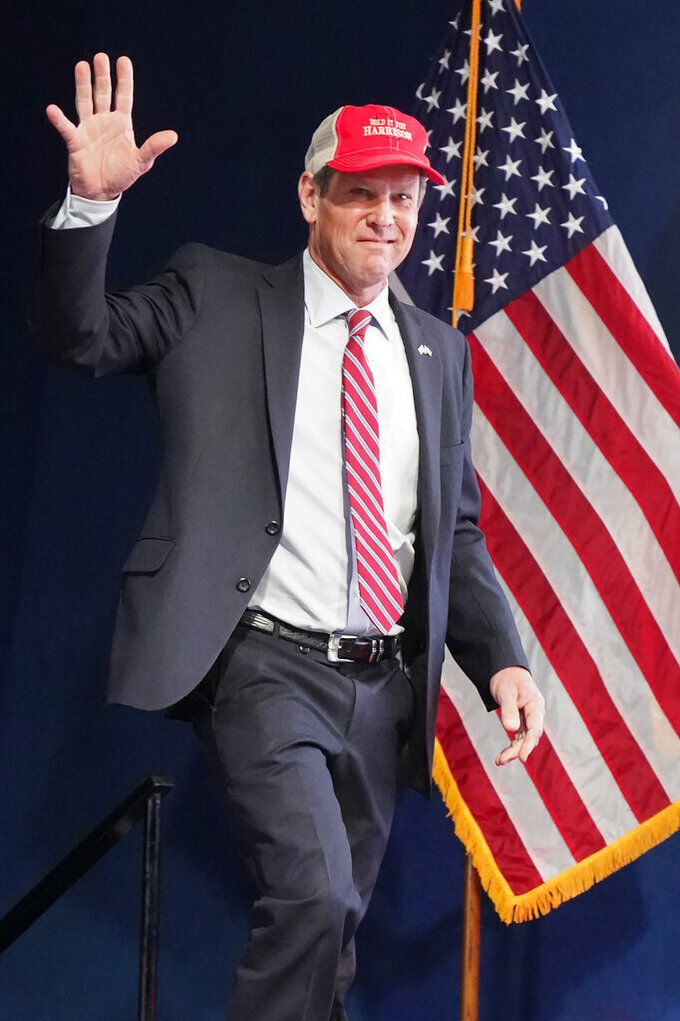 ATLANTA (AP) — Even though he wasn’t on the ballot, Republican Gov. Brian Kemp has been painfully bruised by the 2020 elections.

Trump loyalists are already working to recruit a primary challenger. Meanwhile, Democrats who have gained strength in Georgia since Stacey Abrams’ narrow 2018 loss to Kemp are spoiling for revenge.

“Gov. Kemp, you’re next. See you in 2022,” the Democratic Governors Association tweeted Wednesday as the upset victories of Democrats Raphael Warnock and Jon Ossoff in the Georgia Senate races came to light.

The governor's political capital took a serious hit with the loss of Republican Sen. Kelly Loeffler. A year ago, he chose the wealthy businesswoman and political novice to fill the seat vacated by retiring Sen. Johnny Isakson, in part to help Republicans win back support among suburban women. In doing so, he passed over more experienced contenders — including Trump’s personal choice, former GOP Rep. Doug Collins.

The gamble failed. And the defeats of both Loeffler and fellow Republican David Perdue handed control of the U.S. Senate to Democrats.

“Brian Kemp is the governor of the Titanic,” said Debbie Dooley, president of the Atlanta tea party and a Republican activist. “His governorship hit a big iceberg and it’s going down.”

Dooley said she and other Trump supporters are recruiting candidates to challenge Kemp and other Republican officials deemed disloyal to Trump. Among them: Lt. Gov. Geoff Duncan, who repeatedly refused to back baseless claims that Trump won the election, and Secretary of State Brad Raffensperger, who rejected the president’s pleas to “find” more Trump votes in a recorded phone call that became public.

Some Republicans blame Trump and his false claims of election fraud for hurting GOP turnout in the the Senate runoffs. A crowd attending a Trump rally on the eve of the Senate runoffs erupted in cheers when the president promised to see Kemp defeated in 2022.

“I’ll be here in about a year and a half, campaigning against your governor,” Trump said. “I guarantee it.”

The strain on Kemp was on display Tuesday when the governor attended an election-night event for the GOP Senate candidates before their defeats were sealed.

“This has been a tough time for our family for a lot of reasons,” Kemp told the crowd, which applauded his appearance. He said it wasn’t just the Senate race, but also the coronavirus pandemic, volatile protests over racial injustice and a personal tragedy that hit during the runoff campaigns.

Harrison Deal, a Loeffler campaign worker who had dated one of Kemp’s daughters and grown close to his family, died in a highway crash in December. Kemp’s wife and daughters dabbed at tears as he recalled “the tragic loss of a young life way too soon.”

While Trump and others have named Collins as a potential GOP challenger for Kemp, the former congressman could also run for the Senate seat that Loeffler lost. Warnock will be back on the ballot in 2022 after finishing the final year of Isakson’s term.

Among Democrats, Abrams is being closely watched to see if she will make a second run for governor after losing to Kemp by fewer than 55,000 votes in 2018. She spent the past two years working to register new voters and advocating for expanded access to the ballot in a state that Republicans have controlled for roughly two decades. Abrams has been credited with paving the way for the Democrats' victories in November and on Tuesday.

“You’ve got to give yourself an 18-month window,” said state Rep. Calvin Smyre of Columbus, the legislature’s longest-serving Democrat.

State Sen. Jen Jordan, a Democrat who represents parts of Atlanta and suburbs that have swung rapidly to her party, said the internal Republican jousting has obscured Kemp's other problems. Democrats are determined to make Kemp pay a political price for COVID-19′s impact on Georgia, seeing as reckless his unwillingness to impose a statewide mask mandate and refusal to impose stronger restrictions as hospitalizations and deaths have escalated this winter.

“I’m sure it has not been fun being governor during a pandemic, and the economy is not great,” Jordan said. “He’s getting killed on the GOP side. But he’ll have to answer for all the other stuff, too.”

Kemp will take center stage next week as the Georgia legislature opens, likely highlighting a relatively low unemployment rate, a string of industrial announcements, opposition to gangs and sex trafficking and his plan for a partial expansion of Medicaid. Ryan Mahoney, a political consultant who has worked for Kemp, said the governor’s agenda is popular and he will be able to seize the spotlight.

“The session couldn’t come at a better time,” Mahoney said. “For the next three months, he gets to remind people he’s governor.”

Mahoney said he believes Democratic control of the White House and Congress will help bring Republicans back to Kemp, giving him a chance to reunite a fractured party by spearheading conservative opposition to Biden.

“It’s going to be a pretty binary choice,” Mahoney said. “At some point, are you with us or are you with them?”