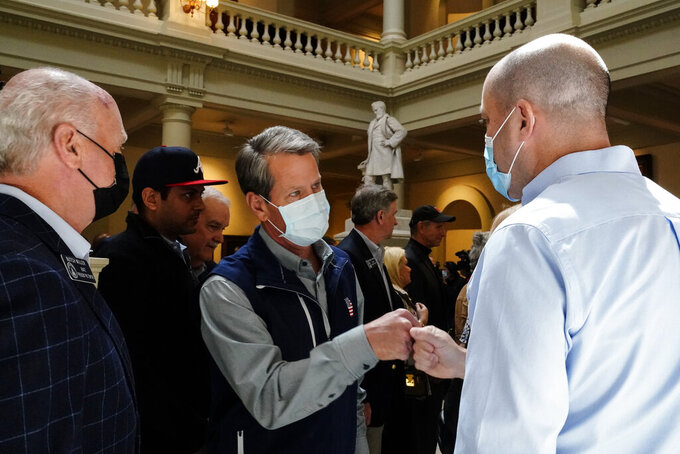 Georgia Gov. Brian Kemp greets supporters after he speaks during a news conference at the State Capitol on Saturday, April 3, 2021, in Atlanta, about Major League Baseball's decision to pull the 2021 All-Star Game from Atlanta over the league's objection to a new Georgia voting law. (AP Photo/Brynn Anderson)

ATLANTA (AP) — Georgia's governor is removing many remaining requirements for social distancing and masked employees from businesses, saying that the state's efforts to control COVID-19 have been successful even as its vaccination rate lags and federal officials continue to warn that the infection rates remain relatively high.

While Gov. Brian Kemp was touring the Mexican border in Texas on Friday, the Republican's office released a new executive order that takes effect Saturday and runs through May 30.

“Businesses across the Peach State have followed COVID-19 restrictions for over a year to keep their employees and customers safe, and will now be able to make informed decisions about how their business operations move forward," said Mallory Blount, a spokesperson for Kemp. “Georgians know best how to protect themselves and their families, and they deserve to be able to return to normal.”

But public health experts fear another surge, possibly driven by more infectious variants of the virus.

More than 6 million doses of vaccines have been given in Georgia, but the state ranks 44th in doses administered per capita to people 18 and older.

Georgia never had a statewide mask mandate, although Kemp eventually allowed local governments to impose them if infection rates were high. But Kemp had imposed mask mandates on many businesses. Except for in the health care sector, he lifted those mandates on Friday. Tattoo artists, for example, no longer have to wear a mask as of Saturday.

Kemp is far from alone in easing restrictions, though, as even leaders in many states that have been far more cautious are making the same moves.

Movie theaters are no longer required to enforce any seating distance between unrelated customers, down from 3 feet (0.9 meters) and an earlier 6 feet.

Gyms no longer have to use contactless check-in, provide wipes, enforce social distancing, require 6 feet between people in fitness classes or encourage the use of face coverings.

After earlier repealing a 50-person limit on gatherings when people are closer than 6 feet, Kemp removed many of the remaining requirements on live performance venues and conventions. Convention workers no longer have to wear a mask. They no longer have to screen convention attendees, require preregistration, enforce social distancing on transportation, stagger attendance times, set up one-way aisles, or segregate attendees of different events.

The move came days after the Atlanta United soccer team and Atlanta Braves baseball team announced their venues would go back to full capacity next month. Friday, Atlanta Motor Speedway announced it would allow patrons to fill grandstands at the July NASCAR race.

Georgia’s eight state-run mass vaccination sites are closing May 21 following what officials called “a notable decrease in demand,” As of Monday, the sites will no longer give first doses of the Pfizer vaccine. Instead, they will offer second doses of Pfizer and the single-dose Johnson & Johnson vaccine. They are allowing anyone to drive up without appointments.

Kemp earlier extended through May 30 the underlying state of emergency that gives him extraordinary legal powers.

Democrats have been critical of Kemp's approach, which he has said aims to balance public health and the economy. On Friday, Democratic Party spokesperson Maggie Chambers said it was the wrong time for further loosening.

“Brian Kemp has failed Georgia at every stage in this pandemic, and now he’s ending even the most bare-bones restrictions keeping Georgians safe," she said in a statement. "Come 2022, Georgia voters will remember that he put politics over their health and safety again and again.”