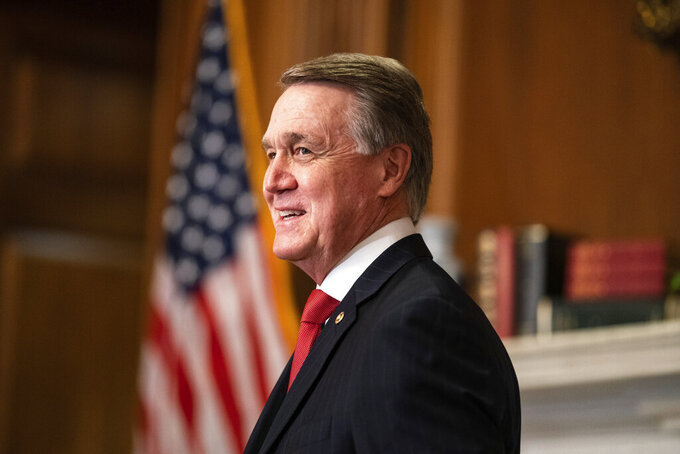 ATLANTA (AP) — With both Senate seats up for grabs, Georgia voters sent one race to a January runoff between Republican Sen. Kelly Loeffler and Democrat Raphael Warnock. It remained too early to call GOP Sen. David Perdue’s reelection race early Wednesday because of uncounted ballots in metro Atlanta.

Georgia was the only state with both its senators on the ballot Tuesday, with control of the Senate in the balance.

Perdue led unofficial returns as he sought a second term against Democrat John Ossoff. But Ossoff still hoped to pick up votes in populous metro Atlanta counties that lean Democratic.

The tight statewide election results extended to the presidential race in Georgia, where it remained too early to call whether President Donald Trump or Democrat Joe Biden won the state's 16 electoral votes.

Loeffler and Warnock were the top two finishers in a crowded field that also included Republican Rep. Doug Collins. But neither was able to get the 50% threshold needed in order to win outright.

Collins conceded defeat Tuesday and immediately endorsed Loeffler after months of bitter attacks between the two over who was more conservative. Loeffler urged Republican voters to unite behind her in the runoff against Warnock.

“You all know how important it is that we all come together,” she said, “because the radical left wants to take over this country.”

Warnock addressed supporters and promised to fight for “ordinary people” worried about keeping their jobs and healthcare.

“It never mattered much to me, and it doesn’t matter tonight, who I have to run against,” Warnock said, “because I’ve always been clear about who I’m running for.”

Warnock gained the backing of Democratic leaders including former President Barack Obama. That helped clear the field for Warnock on the Democratic side while Loeffler and Collins battled it out on the right.

Either Loeffler or Warnock will serve the rest of Isakson’s term. The seat goes on the ballot again in 2022.

Democrats haven't won a Senate race in Georgia in two decades. But ongoing population growth around Atlanta and shifting demographics that have made the state less white — along with dissatisfaction with Trump in the suburbs — have helped fuel hope among Democrats that the state is in play.

Both sides poured huge amounts of money into the races, and record numbers of people cast ballots early, some facing hourslong lines. Georgia has also seen a large increase in absentee ballots cast by mail.

Perdue, a former business executive and a close Trump ally, faces Ossoff, a documentary film producer who launched his political career with an unsuccessful 2017 run for Congress. Their race has been characterized by sharp attacks but relatively moderate political positions.

Perdue has sought to cast Ossoff as backing a “radical socialist agenda,” while Ossoff has portrayed Perdue as a “corrupt” Washington insider.

Loeffler and Collins, a four-term congressman who is one of Trump's most visible defenders in the House, fought a fierce battle for voters from the conservative base of the GOP. Warnock mostly floated above the fray.

Though Collins immediately endorsed Loeffler as part of his concession, the bitterly personal tone of their attacks could make it difficult for supporters of the Republican rivals to unite in time for the January runoff, University of Georgia political scientist Charles Bullock said.

For Loeffler, “her challenge would be to simply get Republicans back behind her,” Bullock said. “That’s a real risk.”

Both Perdue and Loeffler were among senators whose stock trades, made just before the virus caused a downturn in the markets, came under scrutiny. Both denied wrongdoing, saying the trades were made by independent advisers and were ultimately cleared by the Senate Ethics Committee.

Regardless, their opponents made the trades a central line of attack. Collins accused Loeffler of “pandemic profiteering,” while Ossoff accused Perdue of having “profited from the pandemic while he downplayed the risk.”

The top Democrats outraised the Republican incumbents, but the Republicans were also buoyed by outside spending. More than $160 million has been spent on television and digital advertising by candidates and outside groups in both races.

In the Atlanta suburb of Marietta, John Benson showed up nearly an hour before polls opened at the Cobb County Civic Center, waiting in near freezing temperatures. He said he wants senators who are not afraid to stand up to the president.

“Since Donald Trump been in office, it’s been like a lot of them have been scared to speak up,” Benson said.