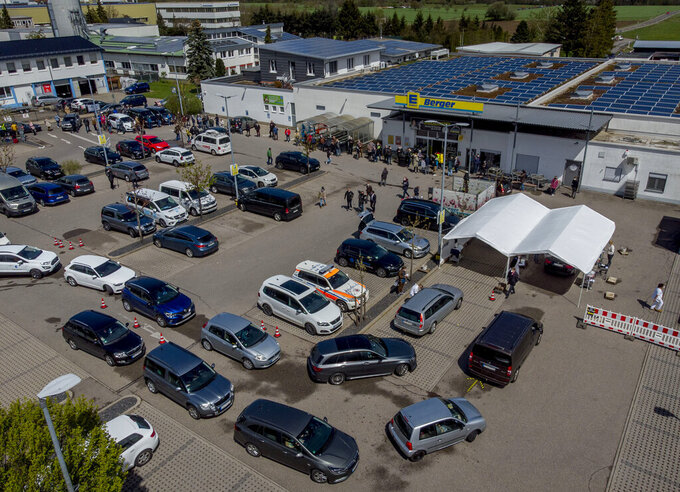 Cars with people waiting for AstraZeneca vaccination queue in front of a tent on the parking lot of a supermarket in Pforzheim, southern Germany, Wednesday, May 5, 2021. A doctor who could not get rid of her AstraZeneca vaccine in her doctor's office decided to offer some 250 doses in drive-in location at the supermarket. (AP Photo/Michael Probst)

PFORZHEIM, Germany (AP) — Faced with an overstock of the AstraZeneca coronavirus vaccine in her practice unwanted by her patients, a doctor in western Germany took matters into her own hands Wednesday and set up shop in a grocery store parking lot, offering it on a first-come-first-vaccinated basis.

Millions of doses of the AstraZeneca vaccine have been safely administered in Europe, but Dr. Nicola Buhlinger-Goepfarth said concerns linger over a rare type of blood clot seen in an extremely small number of jab recipients.

The European Union’s drug regulatory agency said last month that it also found a “possible link” between Johnson & Johnson’s COVID-19 vaccine and extremely rare blood clots. Both vaccines have been been cleared for use in Europe, however, with regulators saying the benefits of getting inoculated against COVID-19 far outweigh the risks.

And if the turnout for Buhlinger-Goepfarth's parking-lot event is anything to go by, many are quite happy to get the AstraZeneca shot.

Buhlinger-Goepfarth noted that the European Union had thoroughly examined the vaccine and approved it.

"I think it has its bad name for no reason.” she said.

People started arriving at about 8 a.m. to get a “ticket” for a vaccine, even though the shots weren't to be started until 1:30 p.m.

Some lined up in their cars at two drive-through tent vaccination centers, while others received their shot inside the supermarket.

By 2:15 p.m., all of Buhlinger-Goepfarth's 250 doses had been spoken for as well as several hundred others brought in, said local official Sabine Wagner.

After supply problems and concerns over efficacy and the rare blood clots involving the AstraZeneca vaccine, the EU has relied heavily on the shots made by German company BioNTech and its U.S. partner Pfizer.

In France, where trust in the AstraZeneca vaccine has suffered a blow in the wake of changes in French policies for its use, a doctor made headlines in April by filming himself ditching unwanted doses that had expired.

Dr. Patrick Vogt, in the eastern French city of Mulhouse, tweeted video of himself throwing away a partially used flacon of AstraZeneca vaccine, because he’d not been able to find enough volunteers for all the doses before they expired.

“In the full throes of the pandemic, I am obliged to throw the Astra vaccine in the trash because no one wants it,” he tweeted. “Crazy, no?”

On the video, Vogt said he had opened the flacon on a Monday but only been able to find takers for six of its doses by Wednesday afternoon, three days later. “All the other people refused the vaccine, no one wants it,” he said. “This vaccine has expired, so I am obliged to throw it away.”

In subsequent French television interviews, he described his video as “a cry of anger, a cry of despair” and pleaded for a relaxation of France’s policy for the vaccine, so more people can get jabs with it.

France first said it shouldn’t be used for older people, before now saying that it must only go to those aged 55 and above, following concerns over blood clots.

The French Health Ministry’s latest figures continue to show that AstraZeneca isn’t getting the same uptake as the Pfizer-BioNTech vaccine. About 90% of the Pfizer doses received by France have been used compared to about 53% of AstraZeneca.

John Leicester in Paris contributed to this report.