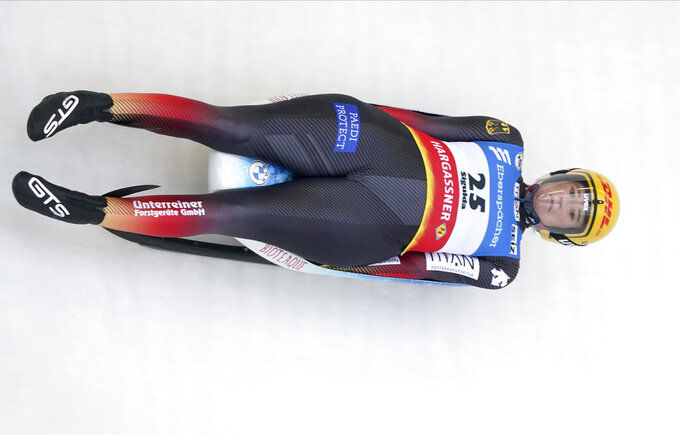 Natalie Geisenberger has made it official: She’s heading to the Beijing Games and seeking a third consecutive Olympic women’s luge gold medal.

The German slider, generally considered the best in the history of her sport, had considered skipping the Olympics for a multitude of reasons — including human rights issues, and her belief that luge athletes were not treated well by Chinese officials when training there earlier this season.

But in a social media post on Monday, the four-time world champion and eight-time World Cup overall champion laid out her reasons for deciding to compete in what presumably will be her final Olympics.

“We athletes have absolutely nothing to do with the decision to award the Olympic Games to Beijing — the (International Olympic Committee) decides and we athletes are presented with a fait accompli,” Geisenberger wrote. “We only have the choice: do I fly there and give everything or do I just let my sporting dream burst so close to the end.”

She chose to go and will be considered among the top medal hopefuls — along with fellow Germans Julia Taubitz and Anna Berreiter, Austria’s Madeleine Egle and American sliders Summer Britcher and Emily Sweeney.

Geisenberger and almost all of the world’s top luge athletes were at the Yanqing Sliding Center north of Beijing this fall for extended training on the Olympic track, followed by the first World Cup race of the season. But not long after leaving China, Geisenberger told German regional broadcaster BR that she was considering skipping the Olympics.

“The conditions that we experienced there speak in favor of not necessarily going back there again,” Geisenberger told BR in December.

She spent several days in quarantine after arriving in China for a three-week training and racing period in November. She got there on a charter flight that carried basically the entire International Luge Federation circuit to China for those events, then wound up being among the sliders identified as a potential close contact to someone who was aboard that flight and tested positive for COVID-19.

Despite testing negative daily, Geisenberger said rules put in place by Chinese officials mandated that she would not be allowed out of her room for several days other than for training sessions. She also said food dropped off outside her door wasn’t to the standard that elite athletes need or want.

“If I had said now that I would not fly, nothing would have changed in China, neither the human rights situation nor anything else,” Geisenberger wrote Monday. “Unfortunately, it takes more than just a few athletes to boycott. Then I would have destroyed my own dream in the first place. There would have been a different name somewhere on the list of results.

“It shouldn’t be that athletes now have to pay for what the IOC and politicians decided 10 years ago,” she added. “Hence my decision to fly to Beijing.”

Geisenberger became a mother for the first time after the 2018 Olympics, missed a year of competition, then returned to the World Cup circuit with eyes on 2022. She said her family has sacrificed considerably on this Olympic journey and she didn’t want to let them down by not competing.

She turns 34 on Feb. 5, the first full day of competition at the Beijing Games.

“The Olympic Games are not just any event,” she said. “It is the greatest of all for almost every athlete and cannot be compared to anything in terms of sport. I can’t say ‘then I’ll just go next year’ — there are only Olympic Games every four years.”

Geisenberger is fourth in the women's World Cup standings this season with one race left, coming this weekend in St. Moritz, Switzerland. She has medaled four times — three silver, one bronze — in 11 races this season.