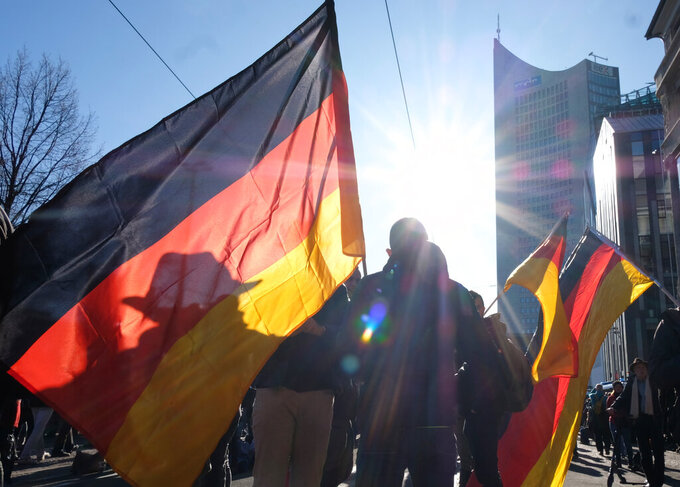 People wave German flags as they take part in a demonstration against coronavirus restrictions in Leipzig, Germany, on Saturday, Nov. 7, 2020. Police ordered the rally to disband after many of the estimated 20,000 participants flouted rules on mask wearing, but didn't step in to prevent people continuing the march, prompting widrespread criticism including from lawmakers and Germany's justice minister. (Sebastian Kahnert/dpa via AP)

BERLIN (AP) — German security officials on Monday defended the decision to let 20,000 people march through the eastern city of Leipzig in a protest against coronavirus restrictions, despite participants flouting the requirement to wear masks and some right-wing extremists attacking police officers and journalists.

Leipzig police ordered the rally Saturday to disband after determining that hygiene rules were being ignored, but didn't stop participants from continuing their march through the city, prompting accusations from Germany's justice minister that police had surrendered the streets to “marauding hooligans.”

A spokesman for Germany's Interior Minister said police in Leipzig had decided to pursue a strategy of “de-escalation” in light of the size and composition of the protest.

“According to the interior minister's view the police rightly chose to bring the situation to an end as calmly as possible and not to use water cannons and tear gas against retirees, children and families,” the spokesman, Steve Alter, told reporters in Berlin.

He acknowledged, however, that there were lessons to be learned from the incident.

“That's a dangerous signal during this extremely critical phase of the pandemic that we as a country are all currently in,” he said.

Germany reported a further 13,363 new confirmed cases of COVID-19 on Monday, along with 63 deaths. Figures announced on Mondays usually don't include all cases as some labs report weekend test results with a delay.

Seibert urged people in Germany to listen to the advice of scientists.

“This virus can be dangerous, even life-threatening, for everyone, whether they're are corona skeptics or not,” he said.

“Among the more than 10,000 people in Germany who have sadly already died from this illness there will certainly have been quite a few who never would have believed that it would pose any risk to them.”