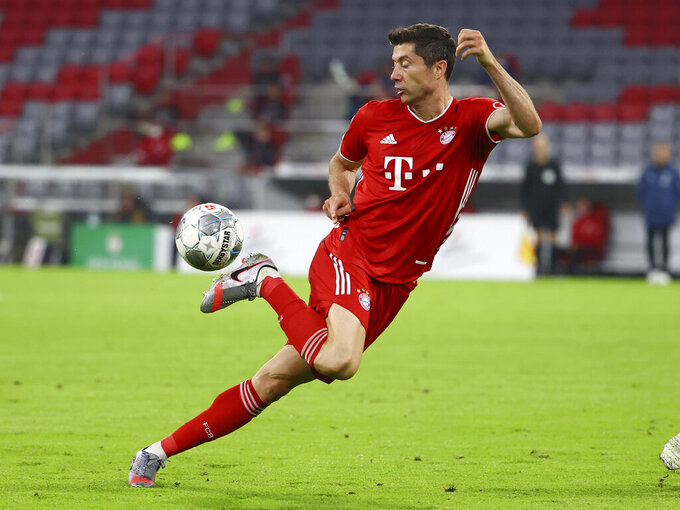 BERLIN (AP) — After nearly a month of play amid the coronavirus pandemic, German soccer is ready to relax some of its strictest hygiene measures.

As of Friday, substitutes and coaching staff will no longer need to wear masks in the Bundesliga, while the number of media permitted at games has been doubled from 13 to 26.

The changes also apply to the second division, third division and women’s Bundesliga, as well as the men’s and women’s German Cup finals.

“The adjustments were checked and accepted by the Federal Ministry for Labor and Social Affairs in consultation with the responsible authorities based on work protection measures against SARS-CoV-2,” the German soccer federation and league said in a joint statement.

Strict testing of players and officials will continue. No new positive cases have been announced among the first division clubs since the league resumed without fans on May 16.

The soccer authorities are still holding out hope that some fans may be allowed attend the German Cup finals in Berlin on July 4. Bayern Munich is to play Bayer Leverkusen in the men’s final, and Wolfsburg will play Essen in the women’s.

“I don’t know if we’re already that far that there can be spectators in Berlin. I can barely imagine it,” Flick said after Bayern beat Eintracht Frankfurt 2-1 on Wednesday in the semifinals. “We have the conditions we have now. We have to accept it.”

With five rounds played since the Bundesliga resumed after a two-month break, it seems players and teams have become used to the new conditions.

“The positive thing is you can speak to everybody and maybe the focus is more on the game. It’s not like a show,” Bayern midfielder Joshua Kimmich said.

Social distancing restrictions have been steadily relaxed as the number of new infections of COVID-19 in Germany has dropped. But there won’t be any full stadiums in the Bundesliga any time soon. Large-scale events will remain prohibited in Germany until Aug. 31 at least.

In Berlin, where the German Cup finals will be played, up to 1,000 people will be permitted at outdoor events from June 30, but events with more than 5,000 people are prohibited until Oct. 24. Rules vary across the country’s federal states.

On the field, at least, a sense of normalcy has resumed with Bayern closing in on its eighth consecutive Bundesliga title. The team can secure the title on Saturday if second-place Borussia Dortmund loses at Fortuna Düsseldorf and Bayern beats Borussia Mönchengladbach later that day.

If the title is wrapped up, Bayern could then turn its attention to breaking the record for goals scored in a single season. The team needs only 11 more to match the 101 goals Bayern scored in the 1971-72 season.

“That would be nice, but we’ve got greater objectives,” said Flick, whose team remains in the hunt for a Bundesliga, German Cup and Champions League treble.