German soccer's Bundesliga given OK to resume in May 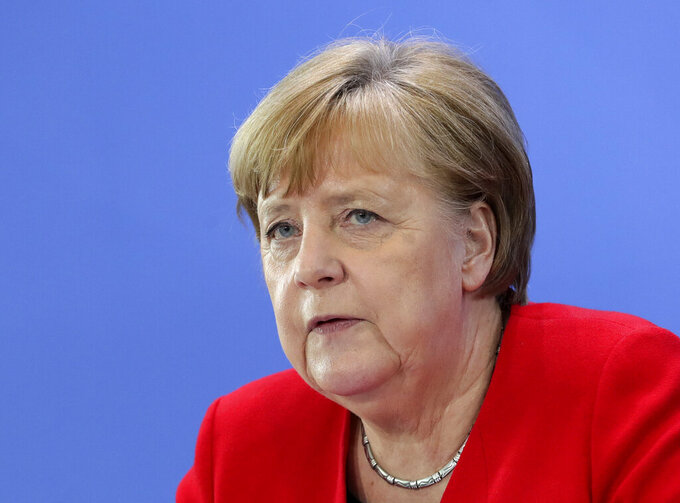 German Chancellor Angela Merkel attends a press conference in Berlin, Germany, Wednesday, May 6, 2020 after an online meeting of Merkel and the German state governors on the loosening of the restictions to reduce the spread of the new coronavirus. (AP Photo/Michael Sohn, pool)

BERLIN (AP) — The Bundesliga can resume playing this month, ending a two-month suspension caused by the coronavirus pandemic.

German Chancellor Angela Merkel announced a loosening of a range of containment measures after meeting with the country’s 16 state governors on Wednesday. Pressure to relax the rules had been growing as the rate of daily infections in the country has dropped.

Soccer in the top two divisions will resume without spectators and with a range of other conditions designed to prevent another outbreak, including the continuous monitoring and testing of players. Teams will also have to spend time in quarantine before games can restart.

“Today’s decision is good news for the Bundesliga and second division,” German soccer league president Christian Seibert said. “It comes with great responsibility for the clubs and their employees to implement the medical and organizational requirements in a disciplined manner.

“Games without spectators are not ideal for anyone. In a crisis threatening the very existence of some clubs, however, it is the only way to keep the leagues in their current form.”

“This is good news for European football and for the return to the new normal after this crisis,” Tebas said.

However, there were some dissidents.

Karl Lauterbach, the Social Democratic Party's health expert, slammed the decision as “disappointing and wrong,” saying it was driven by commercial interests.

“The hygiene concept does not work and the signal is fatal,” Lauterbach said, saying it was wrong to suggest young athletes are not at risk from the virus.

The decision to allow play to resume came despite three positive tests for the virus at Cologne last weekend. The league said there were 10 positive cases from all 36 clubs in the top two divisions.

“I can only appeal for players who behave unreasonably to face consequences,” Söder said.

Hertha has suspended Kalou and blamed the player for the mishap, but there were also infringements that were the club’s responsibility, such as closed doors between rooms.

The initial plan was for teams to spend two weeks in quarantine before games could resume, but a compromise was reached on shorter training camps with the players undergoing regular tests.

“With regular tests, it’s a different situation to when somebody is just tested at the beginning and end of the quarantine. That’s the background,” Merkel said of the change.

While the league and clubs had been pressuring the government for permission to resume, other prominent athletes criticized what they saw as favoritism in soccer.

“If it really comes to it, then the state will be selling the health of the people and people who are suffering to soccer. It’s perverse,” javelin thrower Johannes Vetter said.

Sprint canoeist Ronald Rauhe told the Märkische Allgemeine newspaper that soccer “seems to have a different priority in Germany to schools and kindergartens, as I’m finding out as a father.”

Olympic rowing champion Karl Schulze called for everyone to be treated the same.

“Either everyone takes part in sport again or no one at all,” Schulze said.

The earliest the leagues can resume is the weekend of May 16. Soccer authorities are to hold a general meeting with the clubs via video link on Thursday to discuss how to proceed.

The Bundesliga was suspended with nine rounds remaining on March 13. The clubs committed to finishing the season by the end of June.