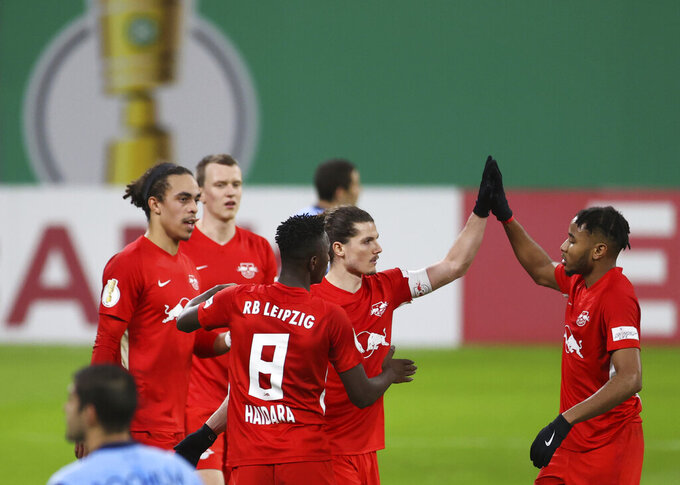 BERLIN (AP) — Germany will not allow Liverpool into the country to play a Champions League game at Leipzig on Feb. 16 because of border restrictions imposed over new variants of the coronavirus.

The German Interior Ministry said Thursday that an application by Leipzig for special permission for Liverpool to enter the country was refused by federal police.

“The Corona Protection Order agreed by the federal government last Friday envisions only a few exceptions and no special arrangement for professional athletes,” the ministry said in an e-mailed statement. “The federal police has told the RB Leipzig club today that the circumstances of the given case do not meet the requirements for an exemption.”

That means the game, the first leg of the round of 16, can’t be played as scheduled on Feb. 16 in Leipzig. The German club could ask UEFA to move the game to a neutral venue. Switching the order of the legs so that Liverpool plays at home first could also be an option, but would likely require Leipzig's players and staff to go into quarantine on their return to Germany from Britain.

UEFA is open to delaying games affected by travel bans. On Tuesday it set April 2 as the latest possible date to finish last-16 games in time for the quarterfinals.

Germany is blocking most arrivals of non-residents from Britain to restrict the spread of new variants of the virus. If the travel restrictions are extended beyond the current expiry date of Feb. 17, Manchester City’s first-leg trip to play Borussia Mönchengladbach on Feb. 24 could be affected.

In the Europa League, Arsenal's home and away games against Benfica may be affected by British restrictions on travel to and from Portugal.