Germany fights back to draw 3-3 with Switzerland in Cologne 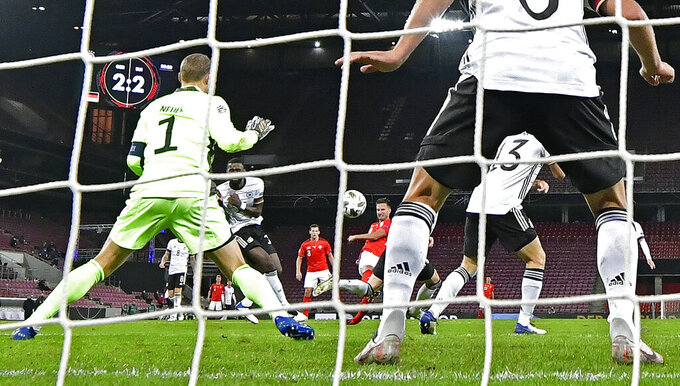 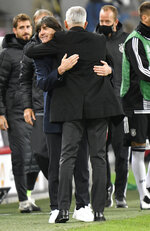 COLOGNE, Germany (AP) — Germany fought back to draw 3-3 with Switzerland in another error-strewn performance in the Nations League on Tuesday.

Mario Gavranovic scored twice for the visitors, who led 2-1 at halftime after capitalizing on sloppy defending and wayward passes from the Germans.

The mistakes will do little to quell criticism from former Germany players including Bastian Schweinsteiger and Lothar Matthäus, who had been calling coach Joachim Löw’s tactics into question after a 2-1 win over Ukraine on Saturday and 3-3 draw with Turkey in a friendly the previous Wednesday.

The game was played without fans due to rising coronavirus infections in the area.

Also in Group 4, Ukraine stunned Spain with a 1-0 win in Kyiv, leaving the Spanish on seven points after four games, one ahead of Germany and Ukraine, with Switzerland bottom of the group after two draws.

Germany captain Manuel Neuer denied former Bayern Munich teammate Xherdan Shaqiri with the first big chance in the fifth minute, but Gavranovic scored from the resultant corner after the home side failed to properly clear.

Remo Freuler, who had sent the ball back in for Gavranovic, chipped Neuer for the visitors’ second goal in the 26th after Gavranovic and Haris Seferovic combined to set him up following a wayward pass from Toni Kroos. It was an uncharacteristic mistake from the Real Madrid player, who was making his 100th appearance for Germany.

Kroos went close before the break and Havertz struck the post after it, before the 21-year-old finally drew Germany level in the 55th after intercepting a weak pass from Fabian Schär.

But Gavranovic grabbed his second goal two minutes later, blasting in the rebound after Neuer twice saved from Seferovic.

Serge Gnabry equalized with his heel on the hour-mark thanks to a low cross from Werner.

Germany substitute Julian Draxler might have created a late winner with some good work to reach the end line, but he managed to miss his teammates when he cut the ball back.

Schär was sent off in injury time with his second yellow card for obstructing Draxler. The resultant free kick failed to yield a winner.