Germany to open up virus vaccinations to all adults in June 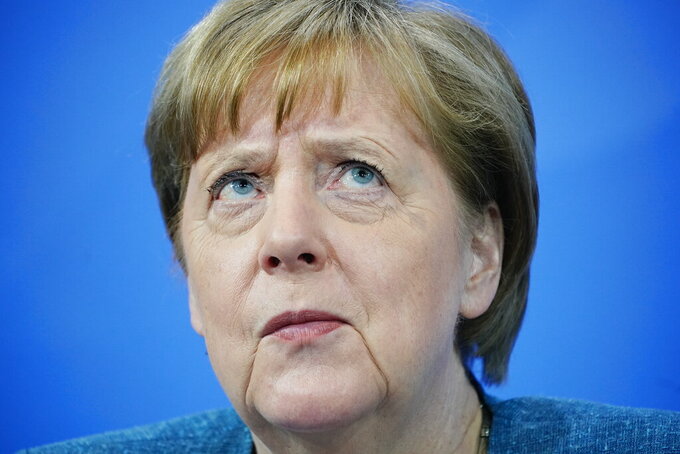 German Chancellor Angela Merkel speaks at a press conference after the vaccination summit in the Chancellery, Berlin, Monday April 26, 2021. (Michael Kappeler/Pool via AP)

BERLIN (AP) — Chancellor Angela Merkel said Monday that Germany will open up COVID-19 vaccinations to all adults in June, based on projections that the country will receive 80 million doses from manufacturers in the second quarter of the year.

Speaking after a meeting with the governors of Germany's 16 states, Merkel said that depending on the actual number of vaccines delivered, the existing system of prioritizing the most vulnerable would be dropped in June (asterisk)at the latest."

Like in other European Union countries, Germany's vaccine campaign got off to a slow start in December, with only 10% of the population getting their first shot by the end of March. Due to limited supply, the elderly, people with with pre-existing conditions and people in the medical and care professions were prioritized.

The rollout has picked up speed significantly in recent weeks. Official figures show 23.4 % of the population had received at least one dose of vaccine by Sunday and about 7.2% of Germany’s 83 million inhabitants had received both shots.

After supply problems and concerns over efficacy and rare blood clots involving the AstraZeneca vaccine, Germany has relied heavily on the shots made by local company BioNTech and its U.S. partner Pfizer. About 50 million doses of that vaccine are expected to be delivered in the second quarter, Merkel said.

She and the governors also discussed whether people who have been fully vaccinated against COVID-19 should be exempt from restrictions put in place to curb the spread of the virus, though no decision was made.

The issue of special privileges for vaccinated people has been hotly debated in Germany, as in other countries. Some in Germany have argued it's unfair on those who haven't been able to get the shot yet. Others say restrictions on civil liberties are justified while people pose a risk to others.

Merkel cited a recent report from Germany's disease control agency, which concluded that people pose “no relevant risk” to others 14 days after they've received a second dose of vaccine. This would mean that they could be treated like people who test negative for the coronavirus or who have recovered from infection.

She cautioned, however, that at some point Germany would find itself in a “transition phase that also won't be easy,” when about half the population has been vaccinated and the other half hasn't. Figures on the weekly infection rate per 100,000 inhabitants, to which many of Germany's pandemic restrictions are linked, would then effectively be much higher than they appear because they apply to a smaller share of the population, Merkel said.

Germany is considering buying the Russian-made vaccine Sputnik V, she said, but that would depend on when the European Medicines Agency approves the shot for use in the European Union.

“The documentation isn't yet sufficient for authorization,” Merkel said. “If this authorization is received very soon, then it will of course still make sense to buy doses of Sputnik. If this only happens in several months then we'll already have enough vaccine.”