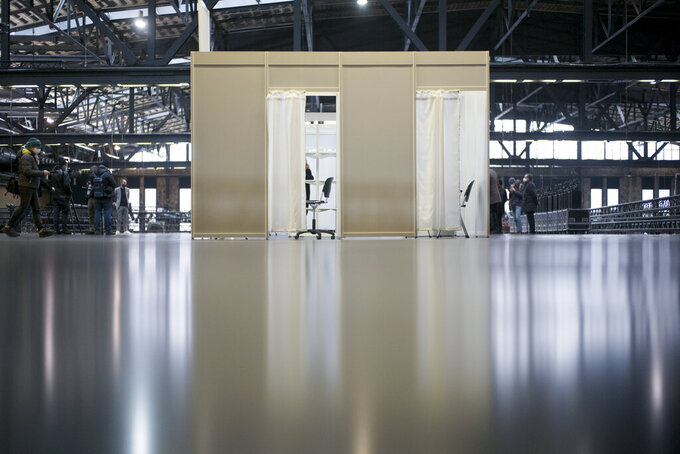 The construction of a planned vaccination center is presented by the Berlin authorities during a media event at the 'Arena Berlin' event venue in Berlin, Germany, Thursday, Dec. 3, 2020. Berlin city authorites will set up six vaccine center until the end of the month. (AP Photo/Markus Schreiber)

BERLIN (AP) — Officials in Germany said Friday that they are taking the potential for attacks on mass vaccination centers into consideration as they set up sites to prepare for European Union regulators authorizing the first coronavirus vaccines.

Britain gave the green light Wednesday for emergency use of a vaccine made by German firm BioNTech and U.S. pharmaceutical giant Pfizer. The European Medicines Agency has indicated it may not decide whether to grant its authorization until Dec. 29, about two weeks later than Germany had expected to launch a national immunization drive.

The former head of Germany's civil protection agency, Albrecht Broemme, was tasked with setting up six mass vaccination sites in Berlin. He said security questions still need to be resolved.

Unlike with hospitals, which tend to be treated respectfully, “with the centers it's indeed possible that people opposed to vaccination or others willing to use violence might say ‘Let’s set this on fire because we think vaccinations are stupid,'" Broemme said.

Broemme plans to have “intense conversations” with police and private security firms about the protection of the Berlin vaccination centers, though he added that no concrete threats have been made so far.

A small but vocal minority in Germany has staged regular protests against the pandemic restrictions imposed by authorities. They argue that limits on social contacts, the closure of some businesses and mask requirements are an unnecessary infringement on their rights.

Opponents of the public health measures overlap with members of anti-vaccination groups who claim - despite repeated government insistence to the contrary - that COVID-19 shots will be compulsory.

A spokesman for Germany's Interior Ministry said security agencies were alert to the issue.

“I am not aware of a concrete threat scenario,” ministry spokesman Markus Lammert told reporters in Berlin, adding: “In any case, we can't provide information about operational details and facts.”

Germany recorded 23,449 more confirmed virus cases on Friday, taking the country's total since the start of the pandemic to 1,130,237 and continuing a pattern of infection figures stagnating at a high level. Germany's disease control agency said virus-related deaths increased by 432 in 24 hours, bringing the death toll to 18,034.