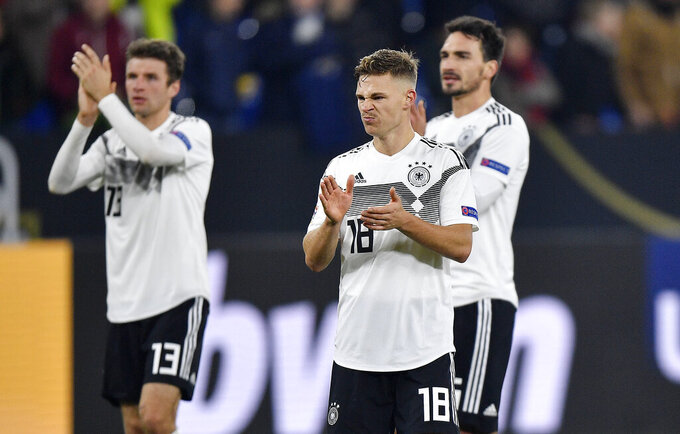 File - In this Monday, Nov. 19, 2018 file photo, German players Thomas Mueller, Joshua Kimmich and Mats Hummels, from left, claps hands to fans after the UEFA Nations League soccer match between Germany and The Netherlands in Gelsenkirchen. Thomas Mueller and Mats Hummels have been recalled by Germany coach Joachim Loew for the European Championship. Loew had dropped both players as part of his shakeup following the disappointing early exit from the 2018 World Cup. (AP Photo/Martin Meissner, file)

BERLIN (AP) — Thomas Müller and Mats Hummels are back.

The two veterans were recalled to the national team Wednesday for the European Championship by Germany coach Joachim Löw.

Löw had dropped both players as part of his shakeup following the disappointing early exit from the 2018 World Cup, but the team failed to shine in their absence and the coach hopes their return will provide a boost for the tournament.

“We didn’t reach the targets we had in mind for 2019-20 with the pandemic, and the development we’d been looking for in the areas we wanted didn’t go according to the plan," Löw said. "So we said, OK we have to reconsider. There’s a tournament now, that’s above anything.”

The 31-year-old Müller, who hasn’t played for Germany since Nov. 19, 2018, scored 11 goals and set up 21 more to help Bayern Munich win its ninth straight Bundesliga title this season. It was Müller’s 10th league title.

Hummels, 32, has marshaled Borussia Dortmund’s defense to help it win the German Cup and qualify for the Champions League.

“A successful tournament is extremely important for German soccer, for the whole nation. That’s why we decided to bring Thomas Müller and Mats Hummels back,” Löw said. “These players are respected and accepted by the younger players because of their great performances and vast experience. So from that point of view it was the right time.”

Jérôme Boateng, who was also dropped by Löw at the same time as Müller and Hummels, was not recalled.

“We thought of Jérôme,” said Löw, who praised the World Cup winner’s strong performances for Bayern this season. “We have (defenders) Niklas Süle and Toni Rüdiger and that’s why we decided to just pick Mats Hummels. But this does not diminish our opinion of him in anyway … Jérôme is a great personality and a great player over many years.”

The 61-year-old coach selected Real Madrid midfielder Toni Kroos despite his coronavirus infection, while Bayern youngster Jamal Musiala was called up to help in attack.

“We saw this season what he delivered in France, he can force himself through,” Löw said of Volland. “He can certainly help us with his strong physique and danger in front of goal.”

Löw, who took over as Germany coach after the 2006 World Cup, is stepping down after the tournament.

Germany will play World Cup champion France in its opening game on June 15, then face European champion Portugal four days later. The team's final group match is against Hungary on June 23. All three games will be played in Munich, where Germany could also play a potential quarterfinal match on July 2.

Barcelona goalkeeper Marc-André ter Stegen is out of the tournament after opting to undergo surgery on a knee injury, while Dortmund captain Marco Reus said Tuesday he will not be playing after discussing his potential participation with Löw.