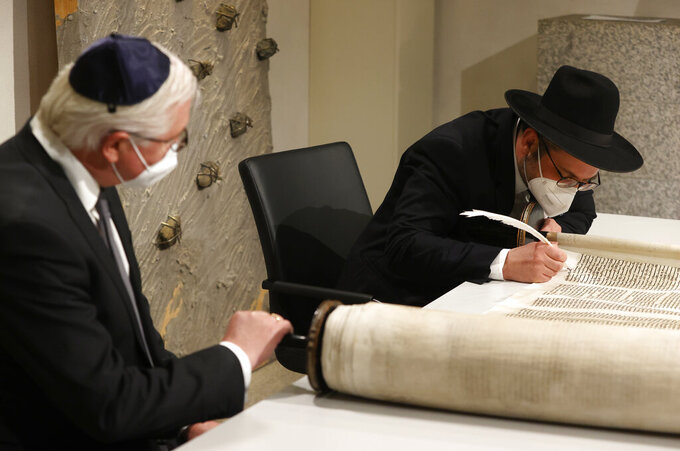 BERLIN (AP) — A survivor of the Holocaust and a young Jewish immigrant spoke about their lives in Germany at a special parliamentary session Wednesday commemorating the victims of the Holocaust 76 years after the Soviet army liberated the Auschwitz death camp in occupied Poland.

Charlotte Knobloch, 88, and Marina Weisband, 33, told lawmakers on International Holocaust Remembrance Day how their lives as Jews in Germany are still far from normal, almost eight decades after the Nazis and their henchmen murdered 6 million European Jews in the Shoah.

Knobloch, the president of the Jewish Community of Munich, looked back at her life from when she was a little girl and had to hide from the Nazis under a false identity. “I lost my homeland, I fought for it and I reclaimed it,” she said.

“Today, I am standing here in front of you as a proud German,” she told lawmakers.

But Knobloch also warned of democracy's fragility and asked lawmakers to protect the achievements of the last decades for both Jews and non-Jews and defend Germany against extremists.

“I'm asking you, please watch out for our country,” she said.

Both Knobloch and Weisband warned of resurging anti-Semitism in Germany, especially while false claims of Jewish responsibility for the coronavirus pandemic abound online and at anti-government protests.

“It is still dangerous for us to be visible as Jews in Germany,” Weisband, who immigrated from Ukraine as a child, said. She described how Jews are under constant police protection whether during visits to the synagogue, in school or at university clubs.

However, Weisband also expressed hope that one day Jewish life may become normal again in Germany, “and then we can simply be human beings.”

Following the speeches in parliament, several high-ranking government officials bore witness in the prayer room of parliament as a rabbi put the finishing touches on a carefully restored Torah scroll.

In the presence of German Chancellor Angela Merkel, President Frank-Walter Steinmeier and others, Rabbi Shaul Nekrich wrote the last 12 letters of the Sulzbacher Torah Scroll, one of Germany's oldest Torah scrolls.

The Torah was created in 1792 in Bavaria and survived a city fire in Sulzbach in 1822, and the so-called Night of Broken Glass in 1938, when Germans across the country destroyed synagogues and killed Jews.

After the end of World War II, the Torah scroll stood unnoticed for around 70 years in the shrine of the Amberg synagogue in Bavaria, until it was discovered again in 2013.

The faded letters and animal skin of the Torah were carefully restored for 45,000 euros ($54,520) with German federal funds in Israel and the Torah will now be used again in services at the Jewish community in Amberg.