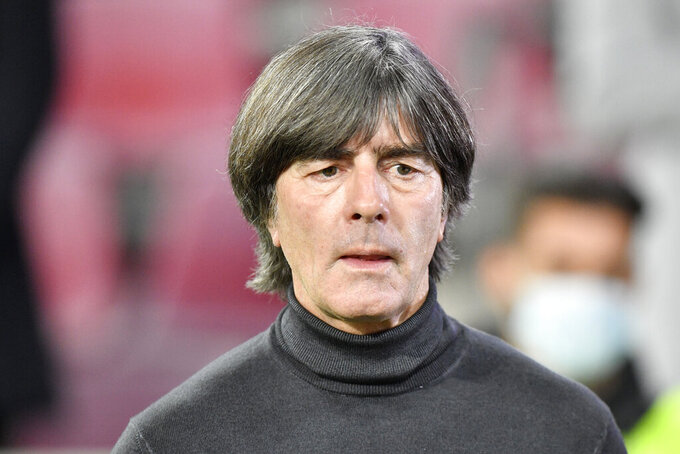 File - In this Wednesday, Oct. 7, 2020 file photo, Germany's head coach Joachim Loew arrives ahead of the international friendly soccer match between Germany and Turkey in Cologne, Germany. The German soccer federation is sticking with Joachim Löw as coach of the national men's team despite poor results including a chastening 6-0 defeat to Spain. (AP Photo/Martin Meissner, file)

BERLIN (AP) — The German soccer federation is sticking with Joachim Löw as coach of the national team despite the 6-0 loss to Spain.

The federation said Monday that its management agreed in a conference call that Löw, who has been in charge since taking over after the 2006 World Cup, should “unreservedly continue” with the team.

“A single game cannot and must not be a yardstick for the general performance of the national team and the national coach,” the federation said, referring to the match against Spain in the Nations League on Nov. 17.

The federation said Löw informed the members of the executive committee of his assessments, ideas and plans for the European Championship, which was postponed until next year because of the coronavirus pandemic.

Germany was drawn into a tough group with France, Portugal and Hungary for Euro 2020, which will be held in June 2021.

Löw led Germany to the World Cup title in 2014, but his reputation took a hit following the team’s poor title defense in Russia and no clear upward trend since.

Löw dropped stalwarts Thomas Müller, Mats Hummels and Jérôme Boateng, but their younger replacements have failed to live up to expectations and the team has been prone to costly mistakes.

The decision not to recall the experienced trio has been criticized by former players such as Bastian Schweinsteiger and Lothar Matthäus.

Despite Nations League victories over a Ukraine team weakened by coronavirus infections, Germany also conceded late equalizers in 1-1 draws against Spain and Switzerland in September. Turkey scored in injury time for a 3-3 draw in their friendly in October.

Löw has been in charge for 189 games with a contract until after the 2022 World Cup in Qatar. A lack of available replacements may have helped the federation maintain faith in the 60-year-old former Freiburg striker.

Löw has also received support from Bundesliga clubs like Bayern Munich and Leipzig for opting to give their players a rest for friendly games amid the hectic schedule caused by coronavirus-induced postponements.

Löw chalked up the loss to Spain as an isolated failure.

“When everyone is healthy, our team is very dangerous, even if it’s young and inexperienced,” Löw said in Seville.

“There is a firm conviction that Joachim Löw and his coaching team will deliver successful games and results despite a challenging situation for everyone. The coach will take all the necessary steps for an exciting 2021 European Championship,” the federation said in its statement.

“We agree with the coach’s assessment that the following tournaments must already play a role in perspectives and sporting goals – namely the 2022 World Cup in Qatar and the 2024 European Championship in our own country.”