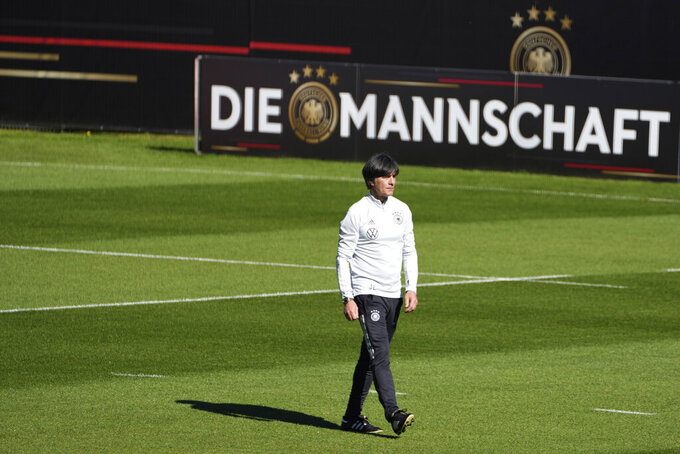 German head coach Joachim Loew watches his team during a first training session of the national soccer team in Seefeld, Austria, Friday, May 28, 2021. Team Germany is based for a training camp in Tyrol prior to the Euro 2020 from May 28 till June 6, 2021. (AP Photo/Matthias Schrader)

SEEFELD, Austria (AP) — Germany is still waiting for Toni Kroos to test negative for the coronavirus and join up with the team ahead of the European Championship, nearly two weeks after the Real Madrid midfielder first contracted the virus, coach Joachim Löw said Saturday.

Madrid said on May 17 that Kroos tested positive while already in isolation after contact with another person who recorded a positive test. That is delaying his arrival at Germany's pre-tournament training camp in Austria.

“Yesterday he was still positive and for as long he remains positive, he has to stay in quarantine,” Löw said. “As soon as he gets a negative test result on one day, he'll set off on the journey to us. He's already had light symptoms, though they were last week."

Kroos said last week on a podcast he hosts with his brother that he had a fever.

Germany has a warm-up friendly against Denmark on Wednesday and another against Latvia on June 7 before starting its Euro 2020 campaign against France in Munich on June 15.

The German players involved in Saturday's Champions League final between Manchester City and Chelsea will join the team later. Löw said he hadn't received any information about the condition of midfielder İlkay Gündoğan after he left City's training session Friday early following a collision with teammate Fernandinho.

There are also fitness concerns over another midfielder, Leon Goretzka, who is scheduled to join the Germany team Tuesday. The Bayern Munich player tore a muscle in a game for the club on May 8.