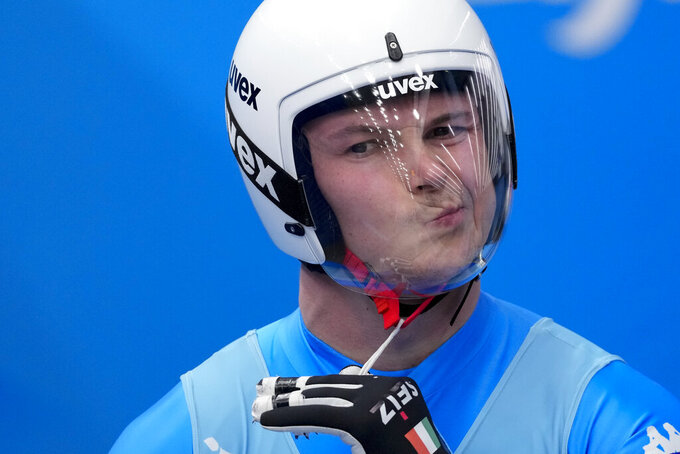 Dominik Fischnaller, of Italy, prepares for a luge men's run at the 2022 Winter Olympics, Saturday, Feb. 5, 2022, in the Yanqing district of Beijing. (AP Photo/Pavel Golovkin)

At least, that’s what history says.

Ludwig, Kindl and Fischnaller were the leaders after Saturday’s first two runs at the Yanqing Sliding Center, and that’s a very good omen for them. There have been 15 previous Olympic men’s luge competitions; in all 15, the eventual gold medalist has been no worse than third after the first two heats.

Ludwig, this season’s World Cup champion, finished his two runs in 1 minute, 54.501 seconds. He knows he’s two runs from gold, though wanted no part of discussing what an Olympic victory would mean.

“I will see tomorrow,” Ludwig said. “I think it would be another big point of my career, but it’s not happened yet. That’s why we’ll talk tomorrow about this, OK?”

“I’ve never been in this position after the first day,” Fischnaller said. “I’m excited about that, to be honest. We’ll go back to the village, have dinner, tomorrow morning we’ll prepare the sled again — and then it’s go time.”

Felix Loch, the two-time Olympic men’s champion from Germany, was in fourth, just behind Fischnaller in 1:54.883. Latvia’s Kristers Aparjods (1:54.961) rounded out the top five.

“I like close racing,” U.S. luge veteran Chris Mazdzer said. “Close racing is so important. A lot of times this year, it hasn’t been close racing. It looks like a 1-2 showdown and that bronze is still anybody’s game. It’s pretty awesome.”

Mazdzer — the 2018 Olympic silver medalist who was a bit shaken up after a training crash Friday that kept him from walking in the opening ceremony — is the top American at the midway point, sitting ninth and two spots ahead of Tucker West. Jonny Gustafson, making his Olympic debut, is 18th going into Sunday’s final runs of the competition.

Mazdzer and West have emerged as the frontrunners for the men’s spot in the U.S. entry for the team relay, a race where the Americans believe they can win a medal.

“The goal has always been to make the relay, to try to have the better chance to medal in that,” West said.

Defending Olympic gold medalist David Gleirscher of Austria is eighth, more than a second off the lead.

“It’s a big gap,” Gleirscher said. “It’s a big challenge for everybody to have four good runs. ... I think not much is possible now.”

For some, the competition was over before it started. There were 35 men who were entered into the Olympic field; only 34 made it to the starting line. Italy’s Kevin Fischnaller — Dominik Fischnaller’s cousin — learned Thursday that his Olympics were over because of a positive COVID-19 test.

For others, victory has nothing to do with results.

The Kumaritashvili family of Georgia now, finally, has seen one of their own compete in an Olympic luge race, with Saba Kumaritashvili — the cousin of Nodar Kumaritashvili, who died in a training accident on the day the 2010 Vancouver Games opened — is 30th at the midway point.

And Poland’s Mateusz Sochowicz, who was badly injured in a crash on the Yanqing track in November — fracturing his left kneecap and cutting his right leg to the bone — is sitting in 27th place, facing long odds to get to a fourth run on Sunday. Only the top 20 after the third run will move to the final heat.