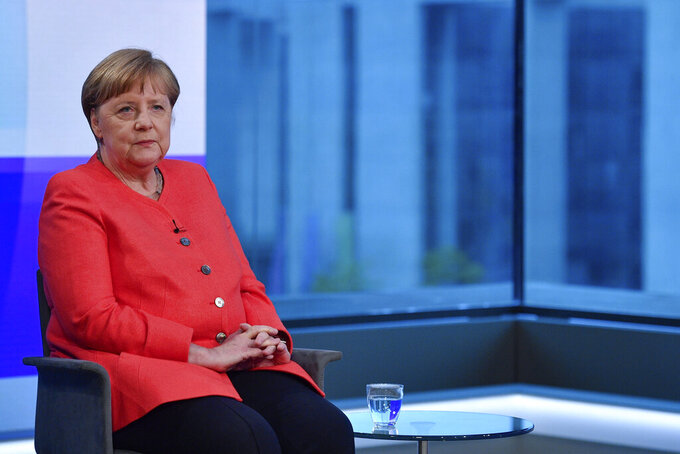 BERLIN (AP) — German Chancellor Angela Merkel on Thursday firmly rejected suggestions that she might seek a fifth term at the helm after pledging in 2018 to step down when her current government leaves office.

Merkel's center-right Union bloc has seen its poll ratings climb since the beginning of the coronavirus pandemic, benefiting from a well-regarded responseto the public health crisis. Germany has escaped the high death rates seen elsewhere in Europe while avoiding the severe lockdowns of many other countries.

Merkel's calm leadership also has won her applause after two years in which her governing coalition had been marred by squabbling.

Last month, Interior Minister Horst Seehofer — a conservative ally who has clashed with Merkel in the past over migration policy — said he had heard more frequent talk recently of a fifth term for the chancellor.

Merkel dismissed such talk in an interview Thursday with ZDF television. Asked if she would consider running again, she replied: “No, no. Really not.”

Pressed as to whether her decision stands, she said: “Very firmly.”

Merkel underlined her insistence shortly afterward in a separate interview with ARD television. “I'm not considering it,” she said. “My word stands, and I have said it often enough too.”

The 65-year-old Merkel, who became chancellor in 2005, announced in October 2018 that she wouldn't seek another term or another political job. But she did say she planned to serve out her current term, which is due to end late next year.

It remains unclear who will seek to replace Merkel as chancellor. Annegret Kramp-Karrenbauer, who succeeded Markel as leader of the Christian Democratic Union party in late 2018 but struggled to impose her authority, announced earlier this year that she wouldn’t run for chancellor and would relinquish the party leadership.

A special convention set for April to choose a successor had to be canceled because of the COVID-19 crisis. A regular party convention in December is now expected to make the choice, with the two parties that make up the Union bloc thrashing out later who will run for chancellor.