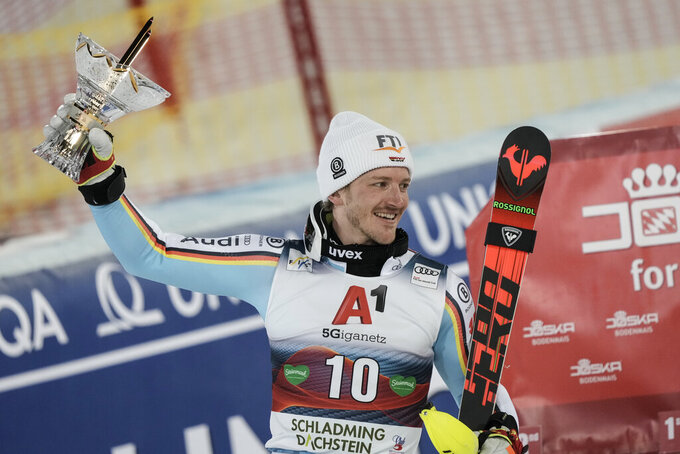 Germany’s Linus Strasser won the final slalom before the Beijing Games on Tuesday, moving up from fifth after the opening leg to finish a slim 0.03 seconds ahead of Atle Lie McGrath of Norway in the prestigious event under the lights labeled “The Night Race.”

Manuel Feller of Austria made a huge jump from 28th in the first leg to place third, 0.39 behind, after sitting out the slalom in Kitzbühel over the weekend because he was positive with COVID-19.

Feller had the fastest second run.

It’s the third win of Strasser’s career in nearly 100 World Cup races. He also won a slalom in Zagreb, Croatia, a year ago, and a city event in Stockholm five years ago.

While there were still four racers to go, Strasser immediately sensed he had done something special, holding up a finger in the No. 1 position after he crossed the line.

For McGrath, who had the No. 34 bib, it marked a return to form following a season-ending injury in Adelboden, Switzerland, last January — and his first podium result in slalom.

When Razzoli straddled and McGrath realized he had reached the podium, he knelt down and started crying.

“It's probably the first time in my life I couldn't stop crying,” McGrath said. “I will never forget this moment.”

Ben Ritchie, the reigning junior world champion, was the top American in 23rd with the No. 44 bib for the first World Cup points of his career.

"It’s nice to get some points under my belt and pick up a little momentum. But now that slalom January is over, I have to wait for a little while,” said Ritchie, who did not qualify for the U.S. ski team's six-man Olympic squad.

Ryding finished 20th three days after he won in Kitzbühel to become the first British winner in the 55-year history of the World Cup.

The Olympics open Feb. 4 and the slalom on Feb. 16 is the last individual event for men.