'Get used to me': Postmaster evokes Trump style in Biden era 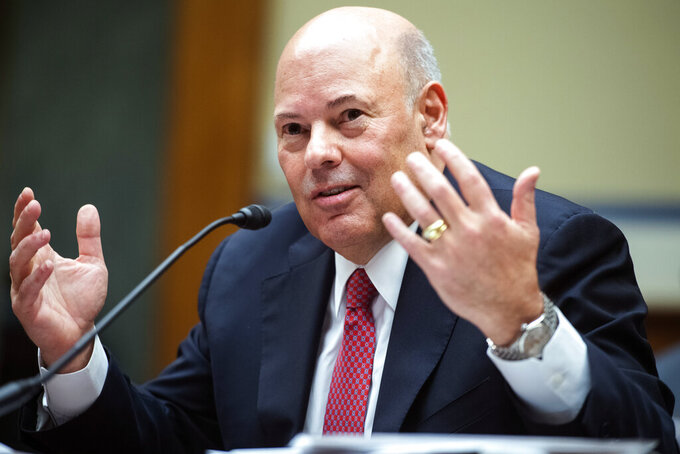 FILE - In this Aug. 24, 2020, file photo, Postmaster General Louis DeJoy testifies during a House Oversight and Reform Committee hearing on the Postal Service on Capitol Hill in Washington. (Tom Williams/Pool via AP, File)

WASHINGTON (AP) — Louis DeJoy is uninterested in the niceties of Washington. The wealthy longtime businessman with an outer borough New York accent prides himself as a problem solver ready to disrupt an unwieldy bureaucracy. And he's facing potential legal troubles.

In other words, the postmaster general may be the closest thing to former President Donald Trump left in the nation's capital. But there's little President Joe Biden can do about it.

“Get used to me,” DeJoy told critics in Congress during a hearing earlier this year.

As he approaches his first anniversary at the U.S. Postal Service's helm, DeJoy is under mounting pressure to resign. He's been criticized by lawmakers from both parties for changes to the agency that have resulted in service slowdowns. Democrats are particularly worried that he's purposefully undermining the post office, which is critical to the conduct of elections and is one of the few federal agencies a vast majority of Americans like.

The scrutiny of DeJoy, 63, has intensified as the Justice Department investigates him over political fundraising at the North Carolina-based company he ran prior to his work at the post office.

“Postmaster General DeJoy would not be in his job if he worked for any other company,” said Rep. Carolyn Maloney, a New York Democrat who chairs the House oversight committee.

DeJoy was born in Brooklyn and still retains its distinct accent, despite long living in Greensboro, North Carolina. After growing up in New York, he took over his father's small, declining trucking business in the 1980s, transforming it into New Breed Logistics, which he sold in 2014. His firm offered logistical services nationwide, which critics are quick to note sometimes competed with the post office.

DeJoy became postmaster general shortly after Trump declared the post office “a joke.” DeJoy implemented cost-cutting mechanisms he said would help make the agency — which has lost $9.2 billion in the 2020 budget year — more fiscally solvent. Those included reducing employee overtime and removing mail-sorting machines from postal facilities around the country.

“I am direct and decisive,” DeJoy said in a video message to employees last summer. “And I don’t mince words.”

After the changes, mail slowed enough that Democrats worried about an electoral crisis. The coronavirus pandemic prompted a voting-by-mail surge in last year's presidential election, and widespread delays sparked concerns that millions of ballots wouldn't arrive on time.

A federal judge wrote in September that “the Postal Service’s actions are not the result of any legitimate business concerns” but instead consistent with the Trump administration's goals “to disrupt and challenge the legitimacy" of elections.

Ultimately, while there were complaints about mail delays affecting some balloting and counting, fears of widespread electoral disruptions from DeJoy's larger changes mostly proved unfounded. The Postal Service says it delivered at least 135 million ballots to or from voters — and delivered 99.89% of those mailed after Sept. 4, ahead of Election Day on Nov. 4, within seven days, as promised.

“Some people may have breathed a sigh of relief,” Mark Dimondstein, president of the American Postal Workers Union, which represents more than 200,000 post office employees, said of passing the election test. "But as important as mail ballots are ... all mail is important."

DeJoy nonetheless apologized to customers affected by service delays that occurred during last year's holiday season rush, and said his whole agency would "strive to do better” amid bipartisan criticism at a House hearing in February.

Such frustrations were new. A Pew Research Center poll released before DeJoy took over found that 91% of Americans had a favorable view of the post office.

“I think the postmaster general’s intentions were good but the implementation was far less so,” said John McHugh, a former New York Republican congressman who now heads the Package Coalition, an advocacy group of businesses that rely on package delivery. “I’d like to think he’s learned his lesson.”

The Postal Service lost $87 billion over the past 14 budget years, according to the Government Accountability Office. While much of the budgetary concerns stem from a 2006 law requiring the agency to fully fund costly retiree health benefits for the next 75 years, the post office has also been hurt by an inevitable, internet-fueled decline in mail volume. That was exacerbated by the pandemic.

In March, DeJoy announced a 10-year plan he says can help the post office avoid $160 billion in further projected losses over the next decade by cutting post office hours, relaxing delivery standards so some mail takes longer, and other austerity measures.

The Postal Service is also seeking to increase the cost of a first-class stamp to 58 cents in late August.

DeJoy's proposed overhaul could help the post office operate more like a business than a public service. But he's bristled at suggestions he's a Trump holdover with an ideology that now conflicts with a Democratic administration.

“I'm not a political appointee," DeJoy told the House hearing. “I was selected by a bipartisan board of governors and I'd really appreciate if you'd get that straight.” When pressed on how long he'd remain in his post, DeJoy responded, “A long time. Get used to me.”

Wisconsin Rep. Mark Pocan, who organized a letter signed by 90 House Democrats in August calling for DeJoy’s removal, said the postmaster general "is a guy who obviously has a lot of confidence in himself.”

“He doesn’t seem to understand that one of the few services that the federal government does that’s in the Constitution is the Postal Service," Pocan said "and we have a higher obligation to do the job correctly.”

DeJoy can only be removed by a vote of the Postal Service’s governing board, which has nine members in addition to DeJoy and the deputy postmaster general. The Senate recently approved three new, Biden-appointed members. By law, though, no more than five of the nine voting board members can be from the same party and two existing, Democratic members have publicly supported DeJoy and his 10-year plan.

Biden could dismiss existing board members and replace them with his own appointees who might support replacing DeJoy — but he'd have to show cause for doing so.

Meantime, Congress may forge ahead with post office changes with DeJoy still in charge. A bipartisan plan to scrap requirements that the Postal Service pre-fund retiree health benefits, potentially saving the agency billions of dollars, is advancing. That's surprising because lawmakers have fought over that issue for years.

Republican supporters say the move would complement DeJoy's 10-year plan rather than supplant it. A Democratic proposal that could defy the postmaster general's overhaul remains stalled.

When Pocan pressed him during another House hearing about what grade he would give himself as postmaster general, DeJoy resisted answering, then finally replied, “An ‘A’ for bringing strategy and the planning and effort.”

Recalling the exchange, Pocan joked that almost no one would give DeJoy’s performance an ‘A,’ “Unless it was followed by a derogatory name.”

This story has been corrected to show that McHugh is a former congressman from New York, not Ohio.