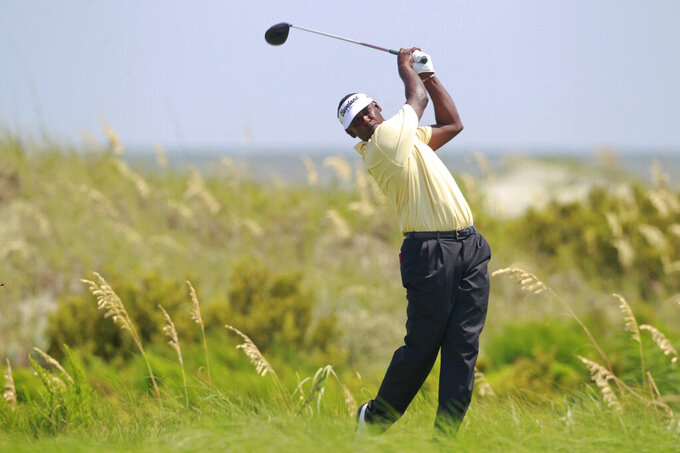 FILE - Vijay Singh of Fiji watches his drive from the sixth tee during the final round of the PGA Championship golf tournament on the Ocean Course of the Kiawah Island Golf Resort in Kiawah Island, S.C., in this Sunday, Aug. 12, 2012, file photo. The PGA returns to the scenic course and officials are expecting a smoother transportation plan for spectators. (AP Photo/John Raoux)

KIAWAH ISLAND, S.C. (AP) — The golf, as it usually is at the Ocean Course, was spectacular. Getting there to see it unfold at the PGA Championship nine years ago was more of a struggle.

The major championship returns to the dramatic, sea-swept course next week with organizers promising a different experience for those attending.

“We did learn a lot in 2012,” tournament director Ryan Ogle said.

There was plenty to learn. The Ocean Course is tucked at the end of a barrier island in the Atlantic Ocean about 30 miles from downtown Charleston. Access much of the way is limited to two-lane roads. That led to massive traffic jams for spectators driving in and buses transporting fans, media and others.

August rainstorms during the third round Saturday didn't help, forcing everyone off the course at the same time and turning grass-and-dirt parking lots into mud-filled pits that were near impossible to drive.

The results were as many complaints about getting there as praise for Rory McIlroy's record eight-shot victory over a Pete Dye design that hadn't seen the world's best since the 1991 Ryder Cup.

There are several things that can't change, Ogle said, like the roads. “So there's going to be slow traffic at times,” he said.

But tournament leaders have changed thing s to make it easier to get in and out. The tournament will no longer charge for parking, as it did nine years ago, which should make the process quicker. There's also a reconfiguration of lanes that access parking, including a dedicated road for shuttles, which wasn't there in 2012.

Organizers also are restricting access to the island, Ogle said, to the most essential people, moving things like trash pickup to night so it won't affect people coming to the course.

And one of the biggest differences: the COVID-19 pandemic limiting the amount of people.

Capacity on the course has been restricted to 10,000 spectators a day, about a third of the estimated 30,000 or so who filled the island for South Carolina's first major championship in 2012.

Organizers had planned on about 150,000 people before the pandemic.

“We would be ignorant to think the reduced spectators doesn't help a little bit,” Ogle said. “Regardless, we still want to plan the best we can because we know it was a challenge in 2012.”

Roger Warren, president of the Kiawah Island Golf Resort, said fans likely will have to prepare for traffic snarls typically experienced before football games at Clemson and South Carolina.

“Is it going to be a long ride out there? Probably. But if you plan for it, you won’t be disappointed," said Warren, a former PGA of America president. “We are sensitive to (parking issues) and committed to making this experience better for people than it was in 2012.”

Having any fans along the course is an improvement for defending champion Collin Morikawa, the 24-year-old who captured his first major last August at Harding Park in San Francisco. It was the first major where spectators were not allowed because of the coronavirus.

Morikawa played the Ocean Course for the first time last month before going to play the RBC Heritage on Hilton Head Island — about 120 miles south of the major tournament site.

He said he enjoyed moving freely about courses for about a month or so after the PGA Tour's return last June from its three-month virus break. “But it's so enjoyable to see (fans) because they love the game,” he said. “They're excited to see us play good golf, and they're going to see some really interesting shots."

Former U.N. Ambassador Nikki Haley is co-chair of the PGA Championship council and was South Carolina's governor the last time the tournament was held on Kiawah Island.

She believes organizers have a solid plan thanks to knowing what worked and how things can be improved on every front.

"That includes traffic,” she said.