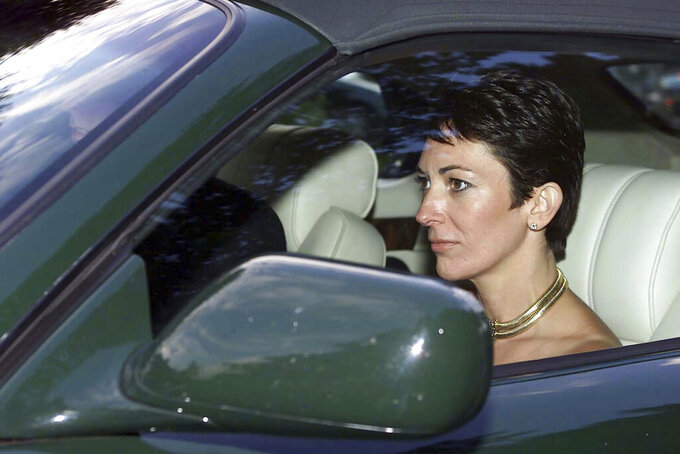 FILE - In this Sept. 2, 2000 file photo, British socialite Ghislaine Maxwell, driven by Britain's Prince Andrew leaves the wedding of a former girlfriend of the prince, Aurelia Cecil, at the Parish Church of St Michael in Compton Chamberlayne near Salisbury, England. The FBI said Thursday July 2, 2020, Ghislaine Maxwell, who was accused by many women of helping procure underage sex partners for Jeffrey Epstein, has been arrested in New Hampshire. (Chris Ison/PA via AP, File)

NEW YORK (AP) — British socialite and longtime Jeffrey Epstein associate Ghislaine Maxwell was made a scapegoat for the disgraced financier since he killed himself last summer while he was facing sex abuse charges, her lawyers said in court papers filed Friday seeking her release from jail while she awaits trial.

After Epstein was found dead in his jail cell, “the media focus quickly shifted to our client - wrongly trying to substitute her for Epstein - even though she’d had no contact with Epstein for more than a decade, had never been charged with a crime or been found liable in any civil litigation and has always denied any allegations of claimed misconduct,” the lawyers wrote in a preview of their defense.

“Ghislaine Maxwell,” they added, “is not Jeffrey Epstein.”

Maxwell, 58, was arrested last week at a New Hampshire estate before being moved to New York City to face federal charges accusing her of helping Epstein sexually exploit young women and girls. She has been detained at a lockup in Brooklyn without bail.

Prosecutors have claimed Maxwell went into hiding months before her arrest and have labeled her an “extreme risk of flight,” noting that she has French, British and U.S. passports.

Her lawyers are seeking her release on $5 million bond under strict conditions including home confinement in the New York City area and electronic monitoring. She would also surrender her travel documents

The U.S. Attorney’s office in Manhattan declined comment on Friday.

A judge has set a hearing for Tuesday to hear bail arguments and to arraign Maxwell on multiple charges, including that she conspired to entice girls as young as 14 to engage in illegal sex acts with Epstein from 1994 through 1997 at his homes in New York City, Florida, and New Mexico and at Maxwell’s residence in London.

In the court papers, lawyers cited reports of coronavirus infections spreading through federal jails as one of the reasons to free Maxwell, arguing that if “she continues to be detained, her health will be at serious risk and she will not be able to receive a fair trial.”

The case for bail is also strengthened by the fact that the government’s case “is based primarily on the testimony of three individuals about events that allegedly occurred roughly 25 years ago,” the defense papers say. “It is inherently more difficult to prosecute cases relating to decades-old conduct."

The Justice Department already has taken a series of steps to maintain Maxwell’s safety while she’s locked up at the Brooklyn jail, including ensuring that she has a roommate in her cell, that she is monitored and that someone is always with her while she’s behind bars, an official familiar with the matter told The Associated Press earlier this week.

After Maxwell’s arrest, federal officials were so worried she might take her own life that they took away her clothes and bedsheets and made her wear paper attire while in custody, according to the official, who could not discuss the matter publicly and spoke on condition of anonymity.

Epstein killed himself in a Manhattan jail last August while he awaited trial on federal sex trafficking charges.